At least 5 reasons why wine duty should be cut

It's the time of year when the wine industry in the UK awaits with bated breath the decision of the Chancellor on alcohol duty. Will he or won't he raise duty on wine again in the Budget? As a reminder alcohol duty is, according to HM Revenue and Customs (HMRC) "a tax that is charged on alcohol produced or processed in the UK, or brought into the UK for consumption." You may not notice increases in duty directly as this tax is paid by your retailer when the wine leaves a bonded or customs-controlled warehouse to go onto their shop shelves or to be sent directly to their customers; it is incorporated into the price that you pay. And we all know how wine prices have been rising recently.

Duty on wine is charged at different rates according to the type of wine and according to alcoholic strength which means that currently £2.23 of the price of a bottle of still wine between 5.5% ABV and 15% ABV is duty. This excise duty is in addition to value added tax (VAT) and in fact excise duty itself incurs 20% VAT. And that £2.23 rate of duty - or £2.86 on a bottle of sparkling wine - is regardless of whether the bottle of wine has cost you £5 or £50. 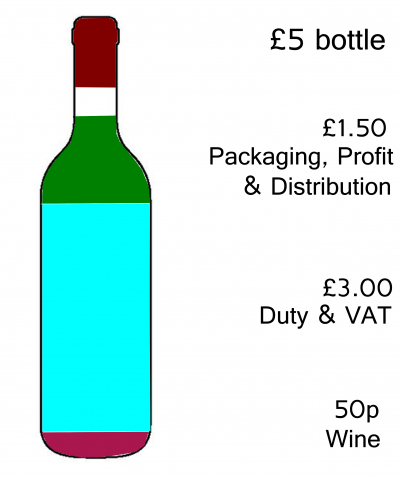 This by the way is one of the reasons why the starting price of my wines with attitude is £12. For a £5 bottle of wine, £3 or 60% is made up of duty and VAT whereas 'only' 34.6% of a £12 bottle of wine goes to the government. But, don't get me started on the subject of cheap wine, let's get back to the Budget and the likelihood of an increase in duty on wine.

The UK government's policy paper on duty on alcohol states that all alcohol duty will rise by the Retail Price Index every year. This means that this next Budget the wine industry is expecting the Chancellor to raise those rates of duty by about 2.7% (January 2020's RPI rate) to £2.29 for still wine and £2.94 for a bottle of sparkling wine, ignoring VAT. Gulp!

You might think that a rise in line with inflation is fair - there is a deficit to sort out after all - however there are a number of things to bear in mind...

In the chart below produced from 2018 rates per hectolitre (in Euros according to the European Commission Excise Duty tables) you can see that 14 of the 28 EU members do not charge excise duty on wine; this figure is now just 13. Some of those that do charge it only apply the charge to sparkling wine. The UK pays one of the highest rates in the EU, the third highest rate after Ireland and Finland. The top 4 countries pay over €100 more per hectolitre than the rest of the excise duty paying countries; in the UK we pay about £1.10 more in duty per bottle of still wine than Lithuania does and about £2.42 more per bottle than France. 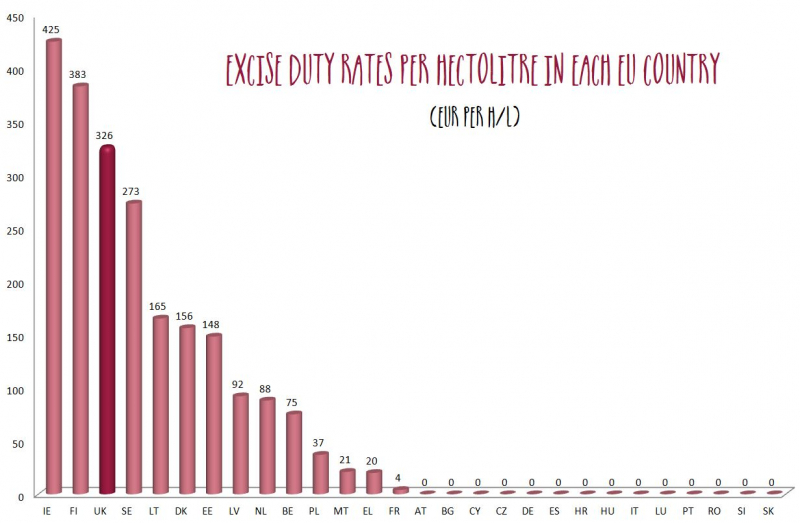 Revenues to the UK Treasury from wine duties has increased 2.3 times over the last 17 years to over £4.25 billion. According to the European Commission's July 2018 Excise Duty tables, wine duty paid in the UK 35% of all the wine duties collected across the EU's 28 countries.

Duty on wine in the UK has risen by an average of just over 5% p.a. in the 17 years to 2017 whereas the annual rate of inflation averaged 2.2% over the same period. Doesn't seem quite fair somehow does it? 2008 was the worst year for wine lovers - the rate of duty rose 9% in March and then 7% in December so perhaps we should be thankful that it is likely to be only around 2.7% for 2020.

A freeze would certainly help the wider industry at a time when wine sales are in decline - certainly in volume terms - and we are all aware that pubs across Britain are closing down every week. In my view the government also needs to have a re-think on duty in order to show support for UK wine makers as the market for English and Welsh wine grows, helped by vast improvements in recent years in quality. How can it be that a bottle of English sparkling wine bought in England incurs £2.86 excise duty but if purchased in Spain would incur no excise duty at all? Albeit this could all change post Brexit.

Bear in mind if the Chancellor sticks to the plan, increases in alcohol duty tend to be effective immediately. This is an added burden for wine retailers especially in the November Budgets because the run up to Christmas accounts for a high percentage of sales. It feels like a tax on Christmas for us all. Bah humbug!

Letters have been written to the Chancellor, pleas made via Twitter so all we can do now is keep our fingers crossed for a cut or a freeze; I suspect that a cut is unlikely but a freeze would be nice!