One of the things I love most about my job is meeting with winemakers because they talk so passionately about how they craft their wines, from the vineyard to the bottle. I invariably learn something new about winemaking and/ or viticulture each time. Joan Àngel Lliberia from Edetària is certainly no exception; in September 2019 I had the privilege of meeting him and Edetària's marketing executive, Nani Ramon, and of tasting several vintages of the amazing Edetària's Selecció Blanc which I have been stocking for some time.

It may not have been his intenti 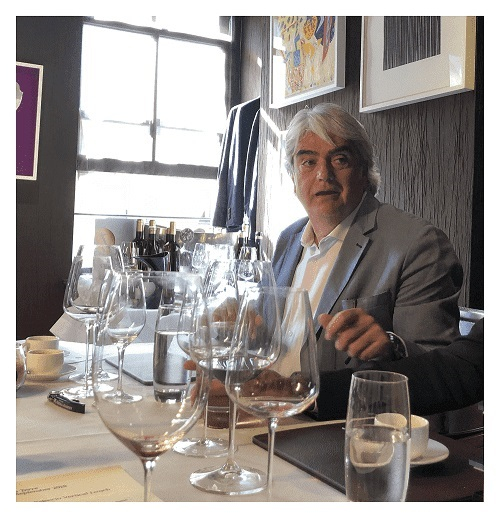 on to follow in his parents’ and grandfather's footsteps; whilst he grew up in the family vineyards, in Catalonia in North East Spain, south of Barcelona and inland from Tarragona and studied agricultural engineering, Joan Àngel went to work initially in a number of different wine companies and multinational corporations. Only in 2003 did he move back to his family's 20 hectare vineyard with a vision to "make the best out of indigenous grapes and terroir's nature, to produce wines with a style of their own”. And this he has certainly done.

Joan Àngel focused initially on the Garnatxa Blanca or Grenache Blanc grape. Grenache Blanc, also known as Garnatxa Blanca in Catalonia and Garnacha Blanca more generally in Spain (the names are used interchangeably in this blogpost), is not one of the better known grapes and indeed there are many who are not even aware of its existence but Joan Àngel has made it his own, to such an extent that José Peñín, author of the annual Peñín guide to Spanish Wine, has recently written that "There is a before and after for grenache blanc with Joan A. Lliberia who has made this grape into a cult wine."

I write more about the Grenache family of grapes in another blogpost but in short, Garnacha Blanc originates in Northern Spain and is permitted in Tarragona including the Terra Alta DO and in Spain’s two highest classifications of wine, Rioja DOCa and Priorat DOCa. It is also seen in white Rhône wines like Châteauneuf du Pape and is fairly widely planted in Roussillon.

Amazingly however one third of the world's Garnatxa Blanca is grown in Edetària's vineyards. Other grape growers are jumping on the current interest in Garnacha Blanc but Joan Àngel told me that he fears that many of the new grapes will be destined for what he called "industrial wines". 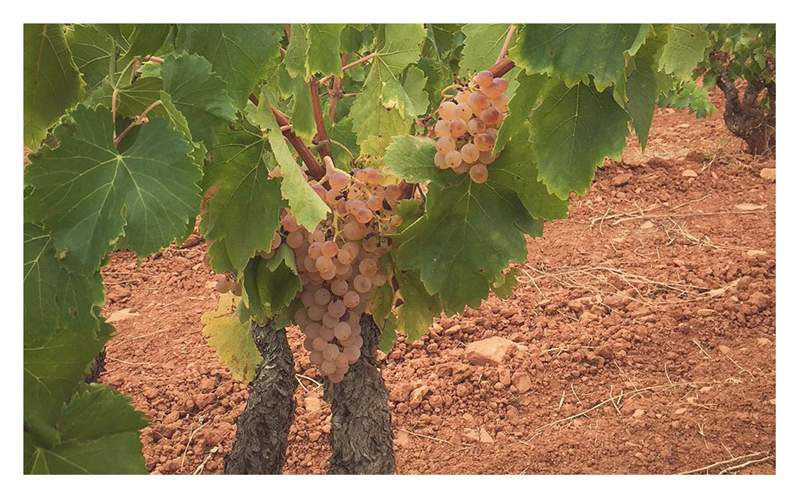 Grenache Blanc is often described as a rather dull grape with low acidity and it has therefore been used more frequently in blends to bring softness rather than to add complex flavours. However it is increasingly being produced as a varietal, i.e. 100% Grenache Blanc with no other grapes added, but this requires very careful wine-making to avoid oxidation and to produce a wine as tasty as Edetària's Selecció Blanc.

What make Edetària Garnatxa Blanca wines so unique are its soils. Joan Àngel expanded the family vineyards - Edetària now owns 60 hectares – and they have five different types of soil which enables Joan Àngel to show wines with  such different characteristics, in his words “… each one with its own personality”. Panal on which the grapes for Edetària's Selecció Blanc are grown is essentially a fossilised sand dune. Other vineyards are on Codols, old river beds with pebbles, on Tapas, multi-coloured silty lime and clay, on Tapas blanc, shallow  soils with marl carbonate and on Vall, deep lime soils. 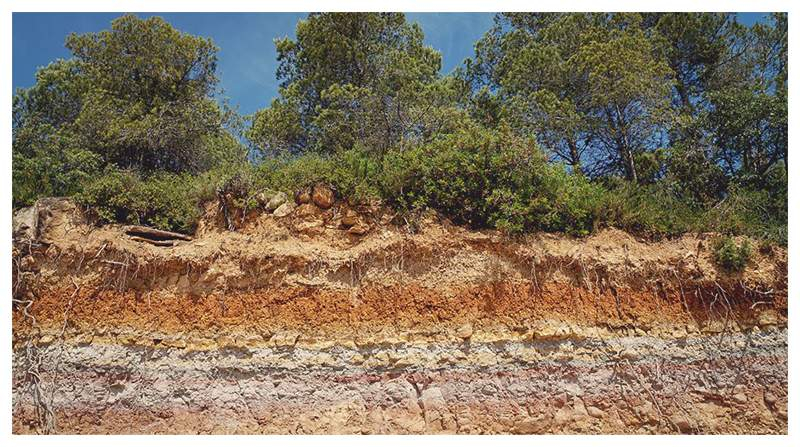 Given the Llibera family’s long history on this land there is a relatively high percentage of old vines, many over 60 years old and the youngest vines c. 25 years old. As regular readers of my blogs will know old vines give added complexity to wine and retain acidity better. Though the winery is in one of Tarragona's highest areas (hence the DO is called Terra Alta or high land), the vineyards are planted lower down so that they can benefit from the "garbinada", humid sea breezes that help to temper the hot summers. The sea breezes also account for the touch of salinity evident in some of Edetària's wines. Joan Àngel makes wines to enjoy with food; the salinity and creaminess of his wines are well-suited to a number of different dishes and food styles. Edetària's Selecció Blanc certainly went well with all the dishes at the tasting - see photo. 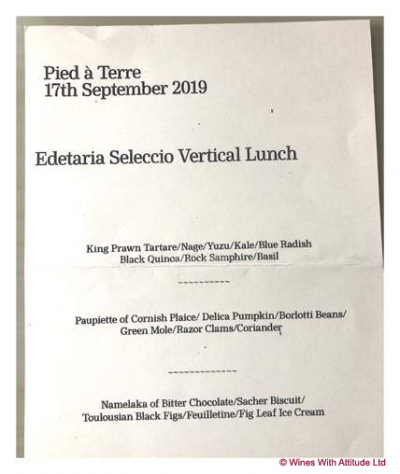 Having steadily adopted organic principles since 2003 Edetària is now 100% organic (certified from 2018). It also uses sustainable practices including using solar energy in the winery. And as mentioned above it is the careful wine-making that is key with Garnatxa Blanca. Grapes go through two manual selections once in the vineyard when they are hand-picked and once at the sorting table to ensure that the grapes used are ripe enough to avoid any bitter, green tastes in the final wine and with sufficient acidity to avoid a 'flabby' or flat wine. Temperatures are kept cool to make sure the grape's fruit flavours are retained. Grapes from each plot are separately vinified so that the different and unique characteristics from each vineyard are expressed separately. After much experimentation and a close relationship with selected coopers, Edetària uses only certain barrels made from French oak for the ageing process and manages the ageing process to ensure that the oak influence enhances the wine rather than overpowering it. The results are truly incredible wines. 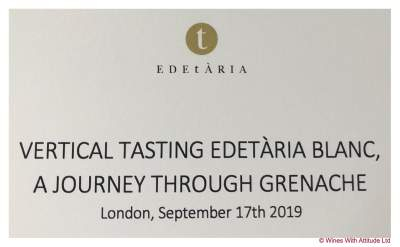 At the vertical tasting of Edetària's Selecció Blanc, the 2016 remains my favourite vintage closely followed by the 2017 and the 2012. There were similar weather conditions in those years. The 2017 still needed some time in bottle to develop the more rounded body of the earlier two vintages and the apricot  and white peach flavours. The extra time in bottle meant that 2012 had developed the hint of hydrocarbons that you can find on aged Riesling along with a nutty finish; the fruits were still very evident however and its similarity to the 2016 suggests that the 2016 vintage will keep for a number of years yet.

I have focused on the white wines of Edetària but they also make some great red wines from Garnacha Fina (AKA Grenache Noir or Garnacha Tinta), a hairy-leaved variety of Grenache called Garnacha Peluda and Carignan. In Joan Àngel's opinion the Garnacha Peluda is the best Grenache red grape in Terra Alta though it requires what he called "precision viticulture", for example passing through the vineyard three times to pick grapes only when at their best polyphenolic best so that it will add aromas and flavours  of red fresh fruits. Having tasted a number of their red wines at the tasting, I was particularly keen on the Via Edetana Garnatxa Negre 2016 (which I can get hold of if you email or call me). I think Edetària's red wines might just become as iconic as the Edetària Garnatxa Blanca wines.