Wines With Attitude has been supplying First Drop wines since mid 2015 and I have never been disappointed in them. It seems that I am in good company - Master of Wine Julia Harding of JancisRobinson.com wrote in August 2016 that their wines never fail to impress her " Firstly in terms of consistent wine quality and style – firmly Australian but with sensitive use of the accelerator and brake pedals to produce wines that are always full of flavour but never heavy or overdone..."

First Drop produces wines with flavour and texture and in their words "a splash of funk" from eclectic varieties grown in the Barossa Valley, Adelaide Hills and McLaren Vale regions of South Australia. They select the best fruit from unique vineyards.

Their philosophy is to have a sensitivity for tradition and a passion for innovation in producing their range of varietals and blends at their winery, ‘Home of the Brave'. They are big believers in making wines with balance - read more on the crucial components of quality wine, including balance.

There are many modern Australian wine makers who are moving away from the straightforward, often jammy, high alcohol, usually oak-influenced wines (read more on 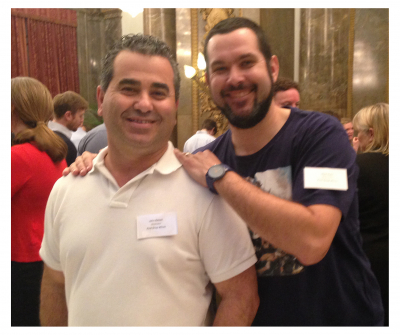 However there is a big difference between most of them and the First Drop partnership in that the latter focuses on fruit and softness resulting in juicy-sweet, fruit-filled, smooth wines versus more savoury wines with super-crisp acidity and more obvious tannins.

Aside from its ethos, the delicious taste and high quality of the wines, what I like about First Drop is the variety including wines produced from interesting Italian & Portuguese grape varieties, the European twist with the Australian style of the wines and of course the quirky labels (see below). First Drop has a rather unique and artistic approach to its packaging - they believe the wine should look as good as it tastes.

In addition First Drop are really nice guys to deal with - see right the photo from the 2016 Australia Day trade fair of JR Retsas, marketeer, and Matt Gant, Essex-born winemaker. There is also a family connection as Matt's parents were until 2019 in charge of selecting UK partners for First Drop wines. 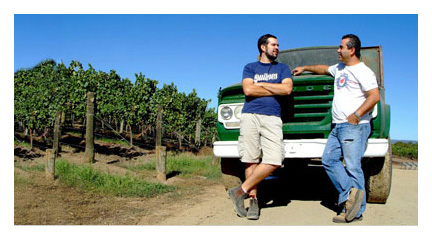 In one particular respect First Drop differs from the typical Wines With Attitude producer, more often than not small, family-run vineyard-owning wineries - First Drop buys in grapes from carefully selected vineyards but works in close partnership with the growers. This gives them variety in their offering and enables them to express the terroir of very different sites across the Barossa Valley, McLaren Vale and Adelaide Hills.

They have been tagged as a 'virtual winery' but this does not detract from the many accolades and awards that First Drop has won for its wines and as a winery including:

In 2008 Wine Spectator magazine described First Drop as "... becoming a winery to be reckoned with"

James Halliday's Wine Companion has awarded First Drop 5 Red Stars for 4 years running (2014 - 2017) meaning it is an "Outstanding winery regularly producing wines of exemplary quality and typicity. Will have at least two wines rated at 95 points or above and had a five-star rating for the previous two years"

Matt & JR recently opened a cellar door-tapas bar at Home of the Brave in Nuriootpa, Barossa Valley so if you are in the area be sure to visit. If a trip to the Barossa Vally is not on the cards, take a look at my selection of their wines instead. You will not be disappointed. I was recently trying to decide which one is my favourite - but that is just too difficult.

P.S. Read about the trend for Italian varietals in Australia.