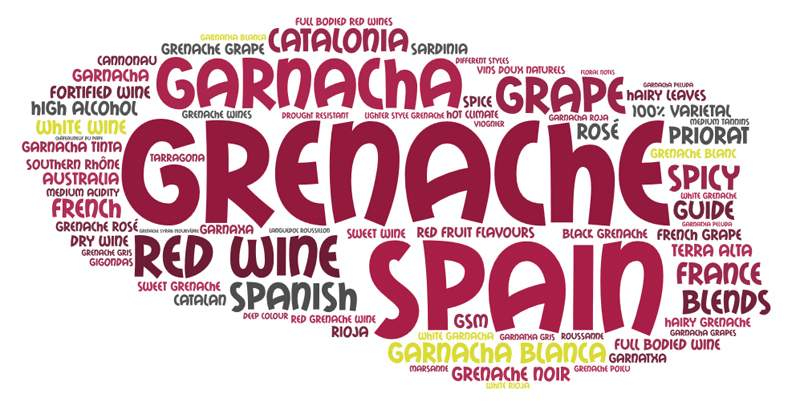 There's a whole family of Grenache grapes and consequently a wide range of different Grenache wines. So, what wines are made from Grenache grapes? Grenache can be a full-bodied wine or a lighter style, Grenache can be a dry wine or a sweet wine, a red wine, white wine or rosé and a fortified wine as you will discover. This blogpost will also look at the regions where Grenache is grown, why Grenache produces different wines, what grape Grenache is similar to and what you should eat with Grenache.

Although many believe Grenache is a French grape, it is in fact Spanish, its Spanish name being Garnacha. There are some who claim that it comes from Sardinia where it is and for centuries has been known as Cannonau. However since Spain has all three different coloured Garnacha grapes and more variations and mutations it seems to be the most likely source. The biggest plantings of Grenache by far are in Spain and Southern France and so the Spanish and French names are the best known (and used interchangeably in this blog post); I have also included the Catalan names since there is a growing interest in the Grenache grape amongst winemakers in Catalonia.

To give it its full French name Grenache Noir is known as Garnacha (Tinta) in Spain and Garnatxa or Garnaxa in Catalonia. It is a very old variety and the 7th most widely-planted black wine grape in the world (163 000 ha in 2015), perhaps surprising since Grenache only wines are quite rare.

The Grenache grape is very vigorous. drought resistant and adapts easily to different soils. It has naturally high alcohol, red fruit flavours, medium acidity and tannins. There are a number of problems for wine makers: the yields and the alcohol level need controlling,  harvesting time must be carefully selected to achieve full ripeness and sufficient acidity and if Grenache vinyeards are irrigated they can produce dilute, one-dimensional wines. It can also oxidise easily and often needs drinking while relatively young. So it seems it is not the easiest grape to tend.

Producers of commercial style Grenache are less concerned about this but producers of better quality wines keep the alcohol in check by not letting the grapes over-ripen; there is an added danger that if grapes are left on the vine too long the acidity, which is not overly high in Grenache, will fall too low and produce flat of "flabby" wines. When winemakers produce a balance between the juicy fruit flavours, the alcohol. the acidity and the tannins, Grenache can be a truly amazing wine that can age well.

Garnacha Blanca is also known as Grenache Blanc or Garnatxa Blanca in Catalan. The white version of Grenache has similar qualities to the black Grenache grape though it is nowhere near as widely planted. Again care needs to be taken to keep yields low and not to let the alcohol take over.

Known as Garnacha Roja, Grenache Gris and Garnatxa Gris, this grey or pink-skinned variety of Grenache is more unusual and most often used in blends with Grenache Blanc to add perfume and body.

Grenache Poilu, Garnacha Peluda or Garnatxa Peluda is very similar to Garnacha Tinta but has one major advantage, higher natural acidity, and one major difference, its hairy leaves. The underside of the leaves are covered in down thought to have developed to preserve moisture.

There is also a grape known as Garnacha Tintorera but it is from another grape family altogether.

Where is Grenache grown?

France and Spain are by far the two largest producers of Grenache Noir, together they account for 87% of its vineyard area worldwide. In France you will find it mainly in the Southern Rhône, in Provence and in Languedoc-Roussillon, all areas in the south with a hot climate. In Spain it is grown mainly in Aragon in the North East, in Catalonia, in Rioja and in Priorat.

It is grown elsewhere but sadly not always to produce the best wines. In some New World warm climate areas Grenache is used for high volume, inexpensive wines. This I know is a very wide generalisation and it is increasingly possible to find high quality Grenache in all countries where it is grown when care has been taken in the wine-making process. In pre-Shiraz Australia Grenache was the most planted black variety and its plantings are again increasing there as our love for Aussie Shiraz is declining.

Again Southern France and Spain have the most Garnacha Blanca vines. Many of the French grapes are destined for blends and for vin doux naturel, a fortified wine. In North East Spain and Tarragona it is grown for blends - it is permitted in white Rioja, Priorat, Terra Alta etc - and increasingly for 100% varietals in Terra Alta.

What wines are made from Grenache grapes?

There are many different styles of Grenache because there are different Grenache grapes and because theuy can be vinified in different ways. Here I cover mainly the red Grenache-based wines and briefly the other styles. I will write in more detail about Garnacha Blanca in a later blog post.

Oz Clarke has described Grenache Noir in his inimitable style as the "wild, wild woman of wine, the sex on wheels and devil take the hindmost, the don't say I didn't warn you" perhaps because of its tendency to high alcohol. This is probably also why, despite being a widely planted grape, Grenache noir is rarely found as a varietal or 100% pure Grenache though it is being seen increasingly in North East Spain. The closest I have had (though now sadly sold out) is the Australian Eperosa Stonegarden Grenache which is 97% and a very elegant style. I am searching for a worthy replacement. 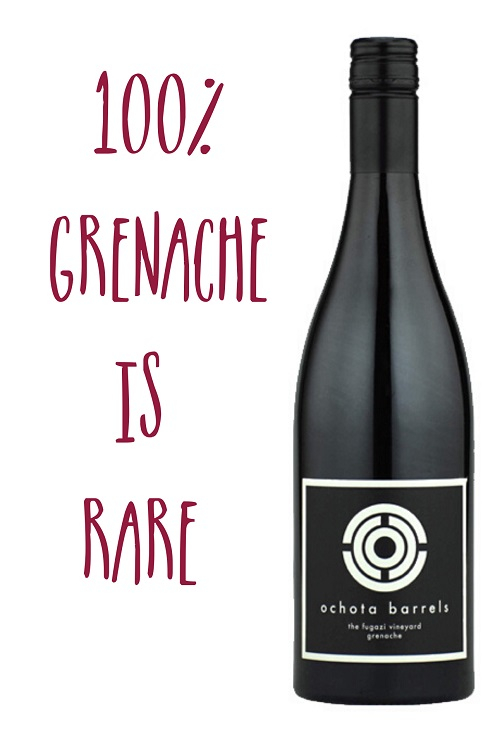 Grenache red wines tend to be deep in colour (if well made), dry, full of complex red fruit flavours in their youth with black fruit and some spicy and savoury characteristics as the wine evolves, relatively full-bodied, fairly high in alcohol c. 14.5% and not hugely tannic.

The full-bodied red wines of the Southern Rhône such as Châteauneuf du Pape and Gigondas are usually blends of GSM or Grenache, Syrah and Mourvèdre (though many more varieties can be included). Grenache is usually the dominant variety and therefore red fruit, warm spice and herb flavours tend to dominate though black fruit flavours may also be evident especially where Mourvèdre is in the blend.

Garnacha Blanca is becoming a "cult wine" according to Spanish wine critic, José Peñín and thanks to Joan Angel Lliberia, winemaker at the Edetària winery in Spain whom you can read about here.

Well-made Garnacha Blanca makes a full-bodied still dry white wine with floral notes on the nose and fairly high alcohol which needs to be balanced with ripe fruit flavours and good acidity. It is therefore fermented at cool temperatures in stainless steel though it may be aged in oak and or on its lees to add complexity.

Spain's Navarra region is known for its dry, crisp and bright pink coloured rosé wines made from Grenache Noir; they have aromas and flavours of red berries especially strawberries. Grenache is also used as part of a blend in many Provence rosés.

Vins doux naturels or VDNs such as Rivesaltes and Rasteau are sweet Grenache-based fortified wine with ABV of 15% to 18%. Grenache's high alcohol lends itself to fortified wines and they can be made from the red or white grapes. VDNs from Grenache Blanc are similar to dessert wines in terms of flavours but are lighter in style and VDNs from Grenache Noir are like a light version of ruby port. Some VDNs are made in an oxidised style and display more nutty, roasted flavours (think tawny port or Madeira in style).

What is Grenache similar to?

Red wines like Grenache are Merlot and Syrah; they have a similar soft red fruit profile and Syrah is also relatively high in alcohol.

If you like unoaked Chardonnay like Chablis or Viognier or the Rhône white blends (of Marsanne, Roussanne, white Grenache & Viognier) you should try a 100% Garnacha Blanca.

What to eat with Grenache 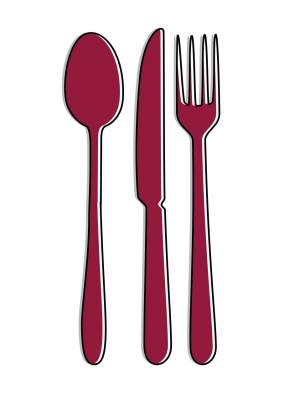 Given its relatively low acidity take care not to drink Grenache with very salty or very acidic foods as these will hide any mouth-watering acidity that the wine has and make it taste flat. Savoury dishes and flavours lend themselves to dry Grenache.

Red Grenache is well suited to the following foods: 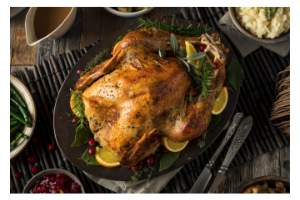 Given its body and structure Garnacha Blanca will match well with a range of foods  but especially with the following:

Remembering that sweet food needs sweeter wines, desserts are the obvious choice to have with Grenache-based Vins doux naturels. The spices in red VDNs complement Christmas pudding especially and chocolate-based desserts but it goes equally well with cheese including Stilton.

So there you have it, Grenache in a nutshell. Keep an eye out for it in blends and increasingly in 100% Grenache wines; with global warming and Grenache's love of heat, I suspect we'll be seeing a lot more Grenache, Garnacha or Garnatxa in the future.