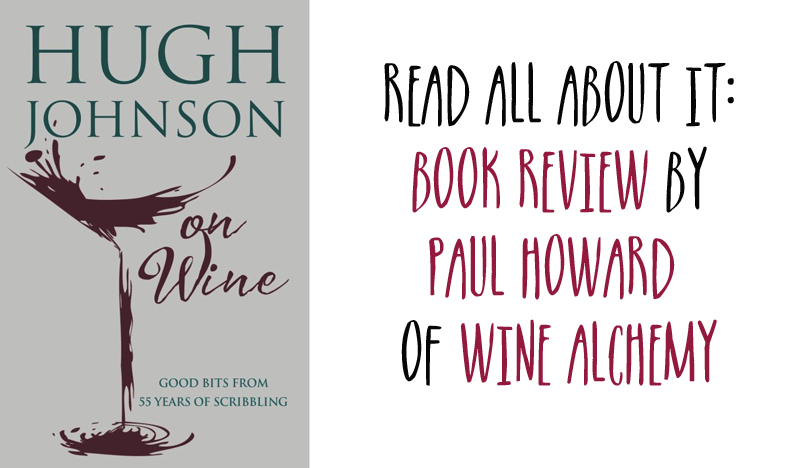 To write well about wine, to engage with an audience and do that consistently over many years is no mean feat. These days, many aspire, but few are chosen. Hugh Johnson has been at it now for 55 years. His latest book, subtitled Good Bits from 55 years of Scribbling, does exactly what it says on the tin. Right from the start, he grasped that what you need are stories. There is no shortage of stories in wine, just a shortage of great storytellers.

This new book is living history rather than a stroll down memory lane. Grouped by decade, they cover the period from 1960 through to our current day. It’s said that these have been the most revolutionary of times in wine. Hugh is there to bear witness, whether it’s the emergence of new countries and regions, global warming, the advance of technology or pricking the conceits of Robert Parker.
During this time too, wine writing itself has changed, from being a hobby to an entire industry. Yet no-one writes better, and, in my opinion, only one or two ever get close. He can say in a line what lesser mortals (myself included) need a paragraph for, and without the plague of technical babble or points systems. To paraphrase him, he has always known the difference between “Tinsel and Gold.”
Even in his oldest pieces, written as Giles Congreve, an early nom de verre, his style appears fully formed. There is a slight bias in content to the nineties and noughties. Regardless, every article is entertaining, expert and erudite. But many are prescient too, capturing trends and offering an opinion on them almost before they appeared. Occasionally, updated observations have been added in the margins, and, with typical open-mindedness, he is not above correcting himself or saying when he called it wrong. I was also delighted to find that there are magnificent illustrations by the late Paul Hogarth included. Those are almost as indispensable as the writing itself because they convey the joy of wine better than virtually any photograph.
In these short pieces and passages, nay, stories, collected from his many books, magazines, and journals, he manages that rare three-card trick of being authoritative, up-to-date and entertaining. His articles are expressed succinctly, economically and always with gentle humour. This book contains over 180 of them, and if I have a criticism, it is that this isn’t enough. What did he leave on the cutting-room floor? Still, a great story-teller knows when to leave the audience wanting more. So read the book from cover to cover, or just dip in for inspiration or two, again and again.
There, I’ve taken a page to say what Hugh could have better stated in a sentence. In other words, if you only buy one book about wine this year, buy this. Scribble on, Sir. Scribble on.

If you like to read about wine, then try The Modern History of Italian Wine.


Paul Howard writes on wine and related subjects on his website
www.winealchemy.co.uk