Most Bordeaux red wines are blends - and more often than not you won't see what the composition of the blend is on the label.

Merlot is the most widely grown black grape at 66% of production with Cabernet Sauvignon at 22.5% and Cabernet Franc at 9.5%. Other grape varieties are allowed – until recently just Malbec, Carmenère and Petit Verdot - but these three combined account for only about 2% of production.

Cabernet Sauvignon brings black fruit aromas and flavours such as blackcurrant and black cherries as well as notes of green pepper, liquorice and tobacco. It adds colour, tannins and body and takes well to oak, all of which extend the ageing potential of the wines.

Merlot tends to add red fruit flavours like raspberry and plum but in warmer vintages it moves towards black fruits like blackberries; its tannins, body and acidity are much softer than Cabernet Sauvignons, hence why they can be a great match. 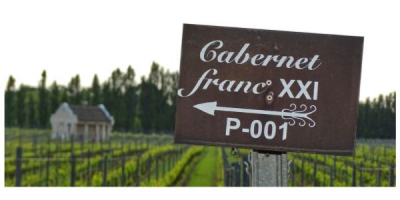 Cabernet Franc is a good addition for its mouth-watering acidity and raspberry and herbaceous notes; it also adds “pencil shavings” aromas to some Bordeaux wines.

Since 2021 four more black grape varieties are permitted, the aim being to add varieties more suited to the higher risk of rot and mildew which come with the changing climate, but they will only be allowed to make up 10% of any Bordeaux blend. These new varieties are Touriga Nacional which is grown extensively in the Douro region for port and ripens late and the lesser-nown black grape varieties, Marlesan, Arinarnoa and Castets.

I'm sure you won't be surprised, this being a French wine region, that terroir is key to understanding Bordeaux wines. The Bordeaux region has traditionally been split into two key areas for red wines, Right Bank Bordeaux and Left Bank Bordeaux. In fact the Entre-Deux-Mers region, situated between the Dordogne and the Garonne rivers and best known for its white wines, produces more red wine than white wine, but most of it fits within the generic Bordeaux rouge and Bordeaux supérieur appellations. 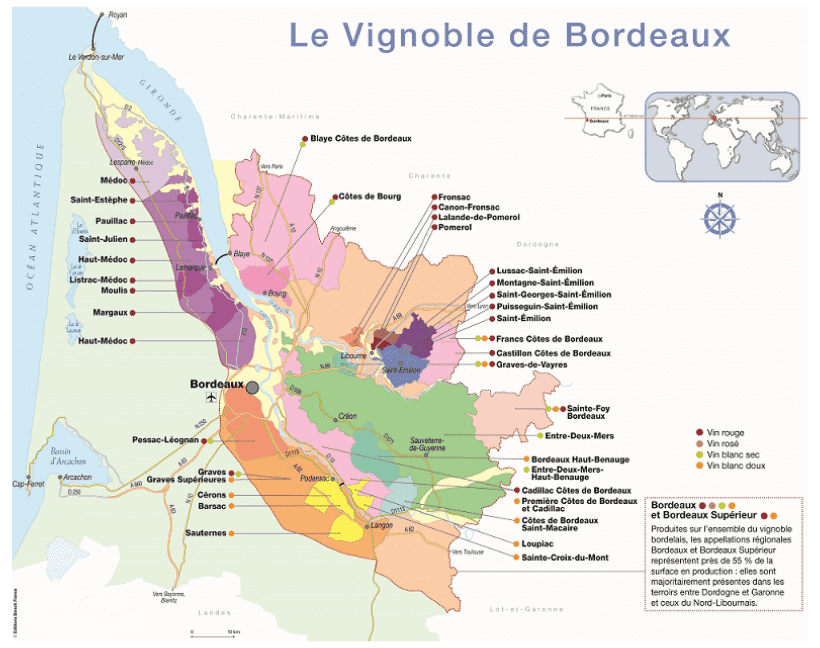 Wines from vineyards situated to the north of the Gironde and Dordogne rivers are sometimes known as Right Bank Bordeaux wines. Generally this area has limestone soils with clay and gravel in some parts. Historically more Merlot has been grown in these vineyards. Typical Right Bank Bordeaux wines include St Emilion, Pomerol, Lalande de Pomerol, Fronsac, Canon-Fronsac and Cotes de Castillon.

Wines from vineyards situated to the south of the Gironde and Garonne rivers are sometimes known as Left Bank Bordeaux wines. Generally this area has clay soils with gravel in the vineyards which typically are part of larger estates than on the Right Bank. Historically more Cabernet Sauvignon has been grown on the Left Bank as the grape is more suited to the well-drained gravel soils. Typical Left Bank Bordeaux wines include Médoc and Haut Médoc, St Julien, Margaux, Pessac-Léognan and Graves.

The climate in Bordeaux on a general level is known as moderate maritime; although temperatures can soar in the summer, there is a moderating influence from the Gulf Stream and proximity to the Atlantic ocean brings rain. Some vintages are more friendly to Cabernet Sauvignon and some to Merlot making some people talk of left bank and right bank vintages but that’s only part of the story because of course different parts of Bordeaux have their own micro-climate.

As the weather can differ so much from year to year and impact on the grapes in many different ways, vintage differences can be huge. 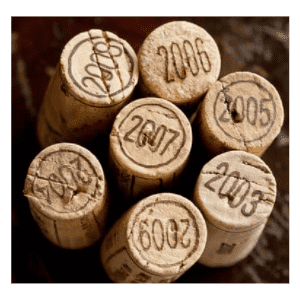 This is why there is such a kerfuffle in April each year as hundreds of wines from the previous year are tasted and compared and vintage reports are written. I have been to some of these tastings and they are actually quite hard work. The wines are still developing in barrel and the Cabernet dominant wines in particular can be quite chewy and tannic; the teeth end up being black after several samples have been tasted. It’s a real skill to be able to work out which are the wines that will taste fabulous when they are actually ready to drink; effectively you are testing the wine’s age-ability so that those who wish to invest early (‘en primeur’) can do so. I personally prefer to wait a couple of years before attempting most Bordeaux wines – and they say for optimum Cabernet-dominant high quality wines, you should wait 10 years before opening the bottle.

Rarely do you see a vintage declared as poor; if it is not fabulous, it is usually ‘difficult’. Here’s a summary of a selection of Bordeaux vintages showing the impact of the weather on the quality and quantity of wine produced:

2020: warm Spring weather encouraged early budding which with an Indian summer made for a potentially long ripening season; harvesting was early and the vintage considered outstanding for red wines

2017: lower yields because of extreme frost in late April and hailstorms in some appellations in August but the smaller output is considered to be high quality, very supple and for earlier drinking than usual.

2015: an exceptional vintage for Right Bank wines and for Margaux and Pessac-Léognan on the Left Bank

2011 was described by some as average and by others as a full-bodied vintage so it goes to show the quality of a vintage is subjective and so, unless you are a real Bordeaux afficionado, perhaps rely more on your personal taste than on the vintage reports.

The flavour of each wine from Bordeaux, as in every other wine region, depends on the vintage and on the terroir but blending or ‘assemblage’ is key to Bordeaux red wines and each chateau’s character and reputation. The winemaker is responsible for creating the blend each year depending on what mother nature has produced; the different grape varieties can have good or bad years and so the blends need to be perfected to create the desired flavours, structure, body, texture and balance.

Each of the c.30 red wine Bordeaux appellations (see more on these below) have distinct differences to the very educated palate – for example St Julien tends to be known for its pencil shaving aromas. Whilst we may not all be able to discern the difference between a Pomerol and a Lalande de Pomerol, the general differences between the two banks or regions within Bordeaux, their terroirs and grapes that mean that it is sometimes relatively easy to tell the difference between the two different styles of red wine and Right Bank/ Left Bank wine tastings can prove to be both entertaining and educational. However this is more a rule of thumb these days; increasingly I'm seeing Merlot becoming the dominant grape in Left Bank Bordeaux wines and the differentiation between Left Bank and Right Bank Bordeaux wines is becoming blurred.

Cabernet Sauvignon-dominant wines of the Left Bank tend to be more tannic, full-bodied, deep coloured wines that can be austere in their youth but have great longevity. The flavours tend to be black fruits - blackcurrant and black cherries with notes of green pepper, liquorice and tobacco; ageing in oak softens the tannins a little and can add vanilla and woody notes. 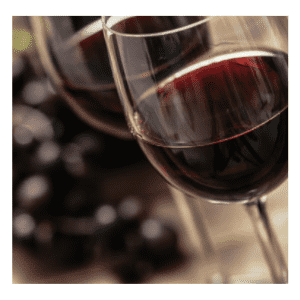 The Merlot-dominant wines of the Right Bank (and of most of the more generic Bordeaux AC and Bordeaux Supérieur AC wines) tend to be very fragrant, lighter in colour with lower acidity and tannins (which is why they can be a great match with Cabernet). As a result they tend to be softer, medium-bodied wines that are usually ready for drinking earlier though, when well-made, they can still be rich and lush with ageing potential. They tend more towards red fruit flavours like raspberry and fresh plums but in warmer vintages they can moves towards black fruits like blackberries.

The intensity of Bordeaux wines differs according to origin, vintage and age of the wine when you drink it; usually Left Bank wines are more intense because of the influence of Cabernet Sauvignon however there are exceptions. For example, of my current Bordeaux wines, the Château Gaby from Right Bank Canon-Fronsac  is more intense than the Domaine de Maucaillou Left Bank Margaux; this is partly because the 2010 Gaby is older and partly because Margaux is considered one of the softer Left Bank wines that is generally ready for drinking earlier than an Haut-Médoc for example.

There are c. 30 red wine appellations in Bordeaux (out of c. 60 in total) which designate that the wine comes from a specific area like Canon-Fronsac for example and that it has met Canon-Fronsac regulations to ensure a certain level of quality. As mentioned above each regional appellation will have a distinctive character to a discerning palate.

Some but not all of the red wine appellations are also classified and, unlike in Burgundy where the differences in terroir led to the classification of Burgundy vineyards and consequently their wines, in Bordeaux the wines have mainly been classified according to the châteaux, the wine’s reputation and price. Most of the classifications date back to 1855 and have rarely changed which has been the cause of much argument ever since.

​ 7. Bordeaux wine classifications are based on the chateaux

I will write more about the Bordeaux classifications in a later blogpost but if you want to try the wines considered the best of Bordeaux, look for a Premier Cru wine from one of the five Premier Cru châteaux such as Château Lafite-Rothschild. These obviously are also the most expensive wines of Bordeaux so whilst they usually are exceptional wines, you can still find outstanding wines from the regional appellations.

Similarly, whilst Bordeaux Supérieur AC is a step down from the regional appellations, you can still find some great wines in this category. Bordeaux AC is a catch-all for most wines that don't fall into one of the sub-regional or the Supérieur appellations - almost half of Bordeaux production is for Bordeaux AC wines. The Supérieur wines will be more complex and intense than the generic Bordeaux wines but generally both will be Merlot-dominant. 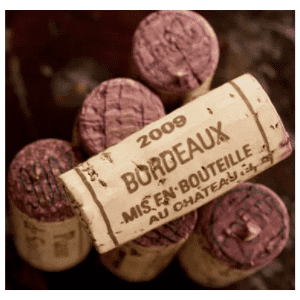 Bordeaux produced about 440m litres of wine (red, white, rosé and sweet) in 2020 though the 10-year average is 486m litres or 650m bottles – this compares to Burgundy’s c.183 million bottles per year. Bordeaux accounts for about 1.4% of global wine production (Burgundy is 0.4%).

Roughly 50% of Bordeaux wine produced is exported, the largest export market being China, followed by Belgium, the USA and then the UK.

Average yields are reducing although the size of the area dedicated to vineyards has stayed the same. The numbers of growers has reduced with about 5653 in 2020 compared to over 8000 in 2010 as smaller producers have been selling up to larger businesses. In addition several châteaux have changed hands in recent years, often to foreign buyers and also to large corporates like insurance companies.

Bordeaux is a large wine area and production is huge and retailing from £5 to £5,000 per bottle so it is impossible to say that all Bordeaux wine deserves the excellent reputation that Bordeaux generally has. The best-made wines from the classified châteaux are age-worthy and drink best after several years of ageing. This means they are in demand and so are expensive. But you can still find value and age-worthy wines in other parts of Bordeaux and in some of the lesser-known appellations like Canon-Fronsac and Lalande de Pomerol - see all my Bordeaux wines with attitude.

I’ll cover Bordeaux wine classifications and the other wines of Bordeaux, its amazing whites and world-renowned dessert wines, at a later date.