The very name “Beaujolais” often sends a shudder down the spine if, like me, you have memories of Beaujolais Nouveau tasting like fiercely dry Ribena with bubblegum and bananas served early on the third Friday in November just 8 weeks or so after the grapes have been harvested. It was in my view the Beaujolais Nouveau hoo-ha that was responsible for Beaujolais wines falling out of fashion in the UK; as their popularity grew, their quality in general suffered. The good news is that there is so much more to Beaujolais than Beaujolais Nouveau and it is possible to find superb wines in the Beaujolais region - and they are slowly but surely becoming fashionable again here in the UK. Read on to find out more about the wines of Beaujolais, how they are made, what they taste like and where to find the best Beaujolais wines.

92% of wine produced in the Beaujolais region is red; you might therefore think that the white wines are not worth a mention but I write a little about them at the end of this article as I think they can be worth seeking out. For now... the red wines of Beaujolais...

How Beaujolais red wines are produced

Beaujolais wines are quintessentially light-bodied, perfumed, fruity wines that tend to be fresh (high in mouth-watering acidity) and relatively low in alcohol (11-13% ABV). The red wines are produced 100% from the Gamay grape, a notoriously tricky grape to manage since it grows very vigourously; there is a lot of work involved to keep yields low for the better wines of the region.

Most Beaujolais wines undergo a process called semi-carbonic maceration; it's not unique to the region but Beaujolais wines are those that are most associated with the process. In summary, the grapes are not initially crushed in a press but pressure from the bunches of grapes on top of each other in huge tanks squeezes out juice. Fermentation of this juice is initiated by indigenous yeast on the grape skins and carbon dioxide that is produced as a result then triggers fermentation inside the uncrushed grapes which start to burst open.

Beaujolais Nouveau (and some Beaujolais AC) goes one step further with full carbonic maceration where the tanks are filled with CO2 gas to trigger the intra-grape or intracellular fermentation. Both these processes enhance the fruity flavours and aromas, extract colour from the skins without extracting too much tannin and produce wines that are ready to drink much more quickly than usual.

If these wines see any oak, and some of the crus in particular will, maturation will be in large used barrels for just a few months to soften the wine and add some texture rather than to impart oak, vanilla and toast flavours which would mask the fruity characteristics of the wine.

The different types of Beaujolais wine

The Beaujolais region which extends from Mâcon on the southern edge of the Burgundy wine region further south almost to Lyons is made up of 12 appellations (read my blog on wine appellations to find out more about wine classification in France and the EU). And, as you might expect, there is a Beaujolais wine hierarchy. 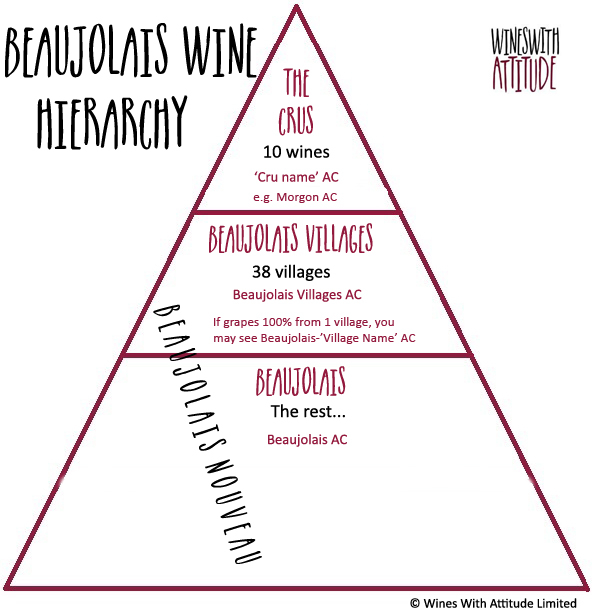 There are 12 appellations (or PDOs) in Beaujolais:

At the top of the scale are the 10 crus  (cru here meaning a wine producing area rather than a single vineyard); these are the smallest regions with their own specific appellations (ACs) and therefore their own specific regulations. They are situated on the slopes of the foothills to the North of and with the best granite soils in the region. Maximum permitted yields for all the cru wines are the lowest of the whole Beaujolais region at 48 hectolitres per hectare though in reality they tend to be produced at yields closer to 40hl/ha (I shall cover yields in a later blog). The 10 crus which together produce about one third of all Beaujolais wines are:

You will often just see the name of the cru on the label; Beaujolais need not be mentioned at all. The Beaujolais crus are the least like what most people expect a Beaujolais wine to be like since they tend to be darker in colour, with a fuller body and a more silky texture, more intense and complex aromas and flavours - and they will generally keep for a few years. They are similar in style to red Burgundy which is of course the wine region just to the North of the crus. But each cru differs in character from the next. For example:

Brouilly, the largest of the crus, produces wines that tend to be deep ruby in colour, elegant, slightly lighter but complex wines with soft tannins and red fruit flavours (plum, strawberry and redcurrant) and mineral notes

Juliénas is noted for its richness, spice and floral aromas. It is one of the darkest in colour and its aromas and flavours are still fruity – sweet cranberry, redcurrant, raspberry and even strawberry – with hints of cinnamon, violet and peony.

Morgon is more garnet in colour and is considered one of the more robust crus as it has a bit of structure. But don't think Morgon is "rustic"; it is still pretty elegant and silky just a little earthier like a Rhône red wine. Its aroma- and flavour-profile includes ripe cherry, ripe plum, kirsch, violet and liquorice. It is one of the most age-worthy crus.

The cru appellations only cover red wines. In fact only Brouilly permits white grapes to be grown in the region but the white wines made there cannot be labelled Brouilly AC but Beaujolais Villages AC Blanc or Beaujolais AC Blanc.

Next in the hierarchy of Beaujolais wines are the Beaujolais Villages wines which account for about 29% of all Beaujolais wine production. The region, which incorporates 38 Beaujolais villages or municipalities, is located effectively around the cru regions on the lower though sometimes steep slopes also more to the North of the region. They can produce red, white or rosé wines. They will have Beaujolais Villages AC on the label but if the grapes for the wine come exclusively from one of the 38 villages, the name of that village will also feature as in Beaujolais-Rivolet AC.

As the terroir in the Beaujolais Villages regions varies, the wines of one village can taste different from another though I suspect only a real Beaujolais Villages expert would be able to guess the village wines correctly. In general the villages wines are all intensely fruity (red fruits with hints of pear-drops) and reasonable value sitting between the crus and the more generic Beaujolais.

Beaujolais AC is naturally the largest appellation and a fallback position if wines don't meet the regulations for the above wines. Most Beaujolais AC wine comes from the warmer south of the region where the land is flatter and the soils more limestone and clay than granite; maxiimum permitted yields are 55hl/ha.

In general this style is perhaps what is most expected of people when they think of Beaujolais, vivid purple in colour, light in body, easy-drinking wines intended to be consumed early with fruit flavours more sharp red fruits like cranberry, tart cherry, raspberry, redcurrant and extending into flavours like bubblegum, kirsch and banana which are a result of the carbonic maceration process.

Very occasionally you may also see Beaujolais Supérieure AC on the label; these are more concentrated Beaujolais AC wines that have met further regulations including a higher minimum alcohol level.

The white wines of Beaujolais

As promised, we cannot forget the white wines of Beaujolais which are Chardonnay and will be labelled as Beaujolais AC Blanc or as a Beaujolais Villages AC Blanc. They are only a small part of total production, 4% (rosé accounts for the other 4%), but there are some amazing examples. They tend to be produced in the North of the region on the best limestone and marl soils similar to neighbour, Burgundy. The best examples combine citrus and white fruit aromas with floral, savoury and saline notes and crisp, fresh acidity with a relatively full body and soft mouthfeel.

- impress your friends; if you smell bubblegum or bananas in your wine, tell your friends that the wine has undergone carbonic maceration!

- avoid the more commercial, lower-end wines if you don't like the over-fruity style and once you find a style of Beaujolais you like, keep a note of the producer

- lighter bodied, fruity red wines with low tannins can be served as low as 10 to 14°C though the cru wines will be better served slightly warmer so that you can appreciate their complexity.

- most Beaujolais wines are meant to be consumed one or two years after release but the higher up the hierarchy you go, the longer the wines will keep. Morgon for example can be kept for 10 years+.

- as the wines are low in tannins and high in acidity, they are generally very food-friendly

- as red Burgundies are rising in price, take a look at some of the crus Beaujolais instead. They are some premium examples and they are a growing trend. Imports into the UK have been growing year on year in the last few years.