So long 2018 and a big welcome to 2019. I doubt that this year will be any less of a rollercoaster than last year for those of us in the UK; in fact I think we are all expecting turmoil and confusion in the first few months at least. So let's try to find some cheery news in what's predicted to happen in the wine world in 2019. What type of wines are likely to be on trend in 2019? Which will be the fashionable wine regions? What are the issues facing the wine industry and ultimately wine consumers in the coming year?

Rising stars in the wine world in 2019

Wines and wine regions that are expected to become more popular in 2019 include: 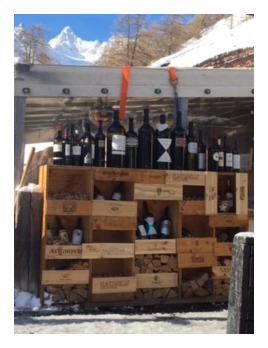 I have noticed a lot of talk in the wine industry about Swiss wines being the "next big thing". This would be great news as I have tried some fabulous wines during various trips to beautiful Switzerland but I'm doubtful that it will be a big thing. Why? I'm sure you will not be surprised to hear that, firstly, Swiss wine production is limited by the mountainous terrain and, secondly, that most of the wine produced in Switzerland is kept there to satisfy local demand and that of the tourist trade. However interest in foreign wines is growing among Swiss wine consumers and more overseas wines are finding their ways onto the shelves of Swiss supermarkets. So perhaps this will free up some Swiss wine for the UK's wine consumers.

Purely in the interests of research (!) I have tried a number of different Swiss wines during past and a very recent trip to the country. My advice, if you want to try some Swiss wine… for reds look at their Pinot Noirs as cool climate Pinots are considered the best but also consider trying Dôle which is a blend of Pinot Noir and Gamay though quality can vary greatly; Merlot is also widely grown. Dôle Blanche by the way is a pale rosé version of Dôle. For whites  I would recommend a recent discovery for me known as Heida or Païen in the Valais region of Switzerland. This grape variety is also known as Traminer or Savagnin Blanc. Not to be confused with Sauvignon Blanc, the Savagnin Blanc wines are relatively full-bodied, aromatic and almost spicy wines more like a Sémillon or Chardonnay than a Sauvignon Blanc.

I'll be keeping a look out for Swiss wines as I look to expand the Wines With Attitude portfolio. In the interim why not try a German Pinot Noir or an Austrian Grüner Veltliner.

We were so lucky to have had an Oregon Pinot Noir in the portfolio until quite recently; sadly it's no longer available in the UK and so I'll also be trying to find a replacement as this other cool climate region produces some fabulous examples and interest in the region is growing. In the interim you cannot go wrong with TWR's Pinot Noir which is a similar style, smooth and sophisticated; I have some of the very popular 2014 vintage left and also the fabulous 2015 has just arrived in the warehouse.

This is another wine-producing country that I hear about more frequently at the moment; their best known grape variety is the Tannat which can produce sometimes heavy and very tannic wines - it's no coincidence that the grape is called Tannat. But the generally smaller Uruguayan wineries have been moving away from the traditional and into the international varieties like Riesling, Chardonnay and Viognier for example.

They'll be growing vines on Mars next…

Well actually Georgia has scientists working on that already, or at least researching how to do it! Though I suspect we are some way off being able to try Martian wines.

The trend very much continues against heavier, high alcohol red wines and towards the lighter, fruitier style. And it's not just me that thinks so - at a number of wine tastings that I hosted at the end of 2018 the heavier reds were shunned by many. The most popular red wine was Marcel Lapierre's Morgon from Beaujolais - it is a stunning wine, from the Gamay grape.

Although Uruguay and other countries have planted international varieties in order to get their name on the wine-producing map, many other countries, perhaps in a bid to be different but almost certainly in a move back to tradition, are improving their wines made from the more unusual, local grape varieties e.g. Grechetto from central Italy and Picpoul from the south of France.

So be brave and try out some new varieties this year.

The interest in biodynamic and organic wine is not going away any time soon - read about the nuances in my blog. Spain is the latest country to show an increasing focus on both categories and this is no surprise as the drinks industry as a whole looks to meet the demands of a generally increasingly health-conscious wine-consuming public. This demand is also fuelled by a growing need to know the origins of our wine. And the industry of course is also looking for ways to create value in its product as demand for wine decreases in the face of competition from other beverages, alcoholic and non-alcoholic.

A lot has been written about blockchain technology over the last 12 months though not a lot about how it could impact the wine industry. The main use anticipated, in fact already being used to a limited extent, is to give the consumer assurances about the provenance of their wine from details on the grape cultivation including any treatments used in the vineyard, on the wine-making process and any additives used, the fermentation temperature etc and on the distribution process.

All this certified and un-editable data can be made available via a QR code on the label. It's early days but I can see this developing during 2019 and it will also be interesting to see what other applications will develop in the wine world beyond that.

It will be no surprise that wine prices are only going one way - and it's not down, I'm afraid. In 2019 prices are expected to be hit by a potentially quintuple whammy:

- the increase in duty courtesy of the UK Chancellor's budget in October 2018 comes into effect on 1st February 2019. The duty on most still wines will increase by over 7p per bottle to £2.2318 (to be precise) and for most sparkling wines by over 9p per bottle to £2.8586. The Government has tried to sugar-coat the bad news stating that a "bottle of wine will be 8p higher but 16p lower than it otherwise would have been since ending the wine duty escalator in 2014". So that's OK then!

- a general increase in prices. I have noticed in the last 12 months especially that many producers are putting up prices by more than usual. I think partly this is due to the premiumisation of wine, linking back to what I wrote earlier about creating value.

-  Many producers and importers are not guaranteeing prices after 29 March 2019 given the uncertainty around Brexit.

-  It is possible that in the event of a no deal Brexit tariffs will be introduced on wines imported from the EU, Chile and South Africa - on top of duty.  The introduction of these wine tariffs  would no doubt be chaotic and it is strongly argued will actually cost the government more than they will raise. The Wine & Spirits Trade Association is lobbying hard for a temporary suspension of wine tariffs in the hope that any future trade deals will remove them altogether.

Naturally Wines With Attitude is not immune to these increases; I'm currently reviewing prices and whilst I will try to keep any price rises to a minimum, I will have to put up some prices early in February. January is therefore a good time to buy - look at it as a way of saving money in the long run!

It is hoped that rumours of wine shortages post Brexit have been greatly exaggerated. I know some of the larger importers have been stockpiling wine though I suspect this is more in a bid to lock in their costs now given the above-mentioned price increases rather than due to concerns about routes to market being particularly tricky. If product shortages are not the Millennium bug of 2019, the problem is expected to be short term. If not, see my solution to higher exchange rates.

I expect  wine in a can to become more widespread in the UK. Personally I can see the advantage when supping a light wine at a picnic or festival but I'm more of a traditionalist when it comes to good wine; even if it came in a can I'd want to drink it from a glass! The USA however has adopted this packaging for some quality wines as well as for more commercial wines. Whilst UK consumers are more open to smaller, lighter and more environmentally-friendly packaging, I suspect it will be a long time before some of the more traditional winemakers adopt cans as a real alternative to glass bottles.

But who knows? I admit that I was initially against screwcaps but now am one of their biggest fans!