A guide to the Malbec grape & its wines 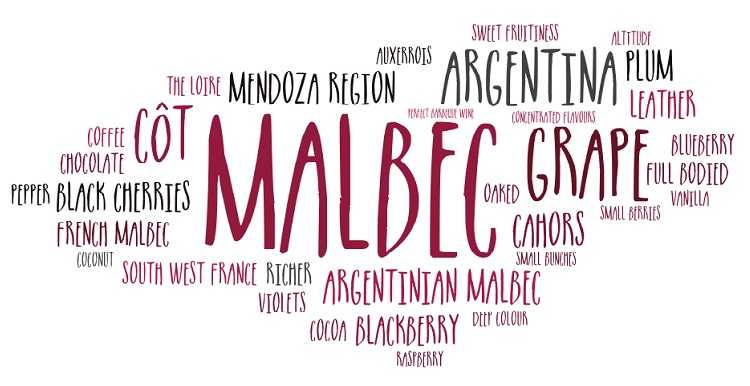 Malbec, Argentinian Malbec in particular, is one of the most popular red wines in the UK. This blogpost looks into the reasons for Malbec’s popularity, explores facts about the Malbec grape that account, in part, for the wine’s different aromas & flavours and for the different styles of Malbec wine. 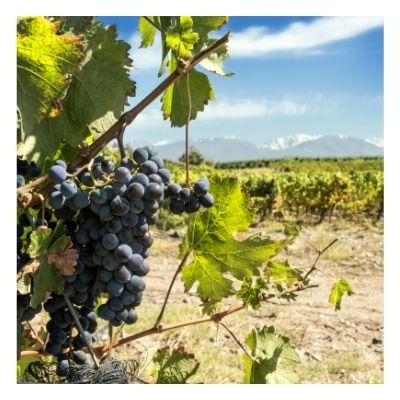 Although the Malbec grape is the flagship grape of Argentina, it originated in the area of South West France around the city of Cahors, east of Bordeaux and north of Toulouse. It is also known in that area and in the Loire where a little is grown as Côt or Auxerrois. It is still grown around Cahors – in fact any Cahors red wines must have a minimum of 70% Malbec in them – and it is one of the varieties permitted in the red wine appellations of Bordeaux. However many acres of Malbec vines were lost to frosts in 1956 and not replaced so it is not often seen in Bordeaux wines, especially since Merlot (with which by the way Malbec shares a parent) is considered a much easier grape to grow. There are a few plantings in Italy, Chile, Australia and the USA but by far the most Malbec is grown in Argentina.

With plantings declining in most other countries, Argentina, especially the Mendoza region, is seen as the Malbec grape’s saviour. Argentina grows by far the most Malbec in the world. The grape, its most widely grown variety, is believed to have been brought to Argentina in the 1860s by Frenchman, Michel Aimé Pouget. It has been discovered over time that Malbec grows better in Argentina when grown at altitude; grapes from cooler higher wine areas have a better chance of retaining acidity and aromas because they ripen over a longer period and therefore they tend to have better ageing potential. Yields are also lower.

Malbec needs to be fully ripened before picking to avoid herbaceous flavours and bitter tannins. Argentinian Malbec has smaller berries and smaller bunches than French Malbec which tends to lead to richer, deeper, more concentrated flavours. 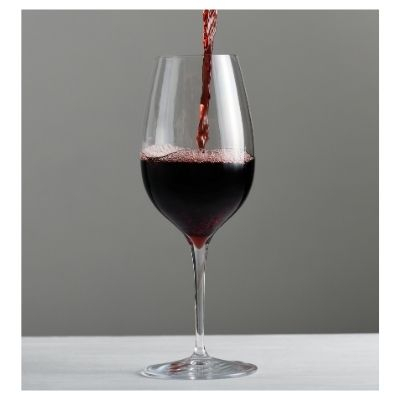 Malbec wine is often 100% Malbec, also known as a varietal wine. Cahors Malbec or Cot wines used to be known as black wines as they were so deep in colour; they were also known for being quite high in tannins and therefore could be kept for many years similar to Bordeaux wines. But there is a tendency in France now to create a softer style of Malbec, perhaps after seeing the success of Argentina’s wines overseas.

With lower tannins and medium acidity most Malbec produced today is not as age-worthy as the older style but good wines will keep for about 10 years. Malbec is almost always full-bodied with black fruits being the predominant flavours – see more on the taste below.

Malbec also makes for a good blending partner and it is often paired with the more austere and tannic grape, Cabernet Sauvignon. However it can work well with several others for example:

Malbec is known for its strong and numerous flavours, typically dark juicy fruits like cherries, blackberries and blueberries but other fruit flavours like raspberries and plums may be present. Sometimes Malbec is described as jammy but generally the fruit flavours are ripe, sweet and fresh. Chocolate, cocoa, coffee, violets and liquorice are common with the possibility of leather, black pepper and if oaked, as Malbec often is, vanilla and coconut.

The older style Cahors wines are generally more tannic and so drink them when they have a few years under their belt unless of course you are a fan of big tannins. Though don’t forget that France is also now making softer style Malbec that is more approachable when young.

Not all Malbec these days is big and dark. Argentinian wine-makers, especially in cooler and higher areas like Patagonia, are developing a more elegant style of Malbec, which is often lighter than usual as they avoid over-extraction. This more delicate style is still fruity but perhaps a little more structured and therefore the wines tend to have more longevity.

If you like Malbec, you might also like a Carmenère from Chile, Côtes du Rhône wines or a Syrah/ Shiraz. If the big style of a 100% Malbec frightens you a little, perhaps try a Malbec blend first.

What to eat with Malbec

Malbec makes a perfect wine for barbeques given its soft tannins and sweet fruitiness; ask any Argentinian! It is good to drink with a good steak, other beef dishes like spaghetti bolognaise and even spicy foods like chilli con carne.

Lamb, including lamb tagine, is also a good match as are pork, venison, game casseroles and strong flavoured offal. A big wine can hold itself well in the presence of strong flavours so you can drink Malbec with roasted or barbequed vegetables, onions, mushrooms, strong cheeses and even chocolate.

Why Malbec is so popular

First and foremost I think that Malbec is so popular in the UK because it is generally so flavoursome; you should find numerous concentrated fruity flavours in both expensive and lower budget wines. The latter may not be as multi-faceted or as elegant as a high-end Malbec but generally it will give you a lot of flavour for your money. Which brings me to my second reason for Malbec’s popularity - there is a Malbec for every budget whether it be £5 or £50+.

Malbec is generally food-friendly though I wouldn’t recommend drinking it with very light or delicately flavoured dishes as the big concentrated flavours of the wine may overpower the food.

So celebrated is Malbec these days, that it has it's own special day, Malbec World Day, on 17th April. Don't wait until then to to crack open a bottle; give one of my awesome Malbec wines a try.