A guide to the wines of the Rhône region 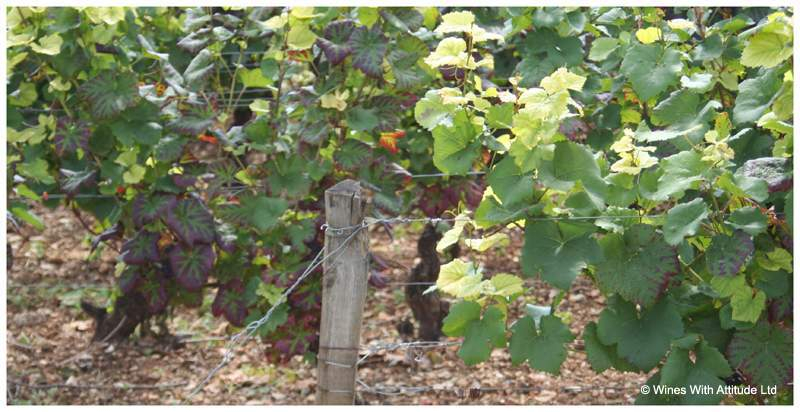 An overview of Rhone wines

This blog post on Rhône wines, the first in a series, can only be an overview - the Rhône wine region is huge and the range of Rhône wines so varied that it is impossible to cover it all in one relatively short article. This guide covers Northern Rhone wines, Southern Rhone wines and their differences, Rhone wine labelling, what Cote du Rhone wines are and the general style of the region's wines. Since 81% of Rhône Valley wines are red, I'll focus on red Rhone wines - with the Rhone's white and rosé wines to be covered at a later date (whites are 6% of production with rosé 13%). The terms Rhône and Rhone are used interchangeably in this blogpost.

First some figures about Rhone wine: there are over 5000 wine-growing businesses in 28 Rhône wine appellations using one or more of 27 permitted grape varieties to produce 3 million hectolitres for c. 372 million bottles of wine*  - and that's ignoring any IGP or vins de pays wines that fall outside the PDO or appellation system   (read more about protected designations of origin or wine appellations).  Only about 1/3 of Rhone wines are exported, the UK being the largest overseas market with 18% of the exports. Ten per cent of the vineyard area is organic, 50% certified & 50% in the process of becoming certified.

Where is the Rhône wine region?

The Rhone region is in South West France. Traditionally we think of the vineyards immediately surrounding the Rhone river between Vienne just south of Lyon and Avignon as the Rhone wine region but the Rhone Valley expands east, west and south to include 7 regional AOCs such as Luberon, Ventoux and Costières de Nîmes that sit between and are therefore sometimes mistakenly considered to be part of Provence or the Languedoc-Roussillon wine regions. Including these 7 "other" Rhone appellations makes the Rhone Valley France's second largest wine region and its second biggest exporting AOC wine region.

Excluding those 7 regional appellations, the Rhone wine region is traditionally split into Northern and Southern Rhone and their wines have some differences mainly due to the variations in climate so I'll next look briefly at the two sub-regions. And then I'll try to make sense of the myriad of Rhone wine labels. 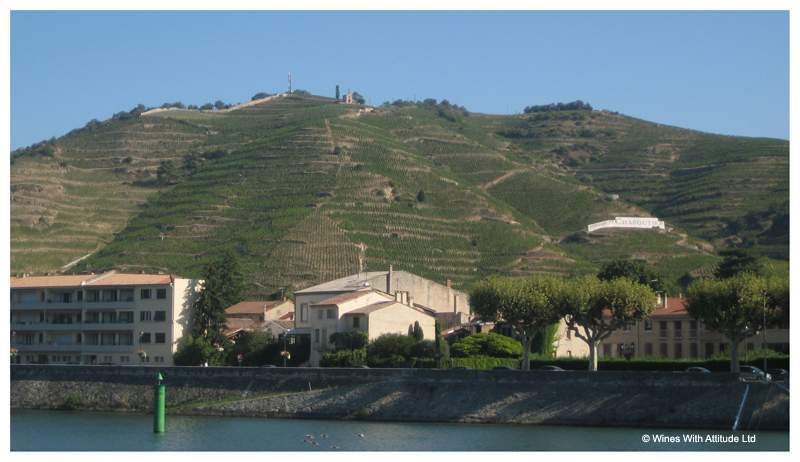 Known as Rhône septentrional, the Northern Rhone is characterised by vineyards on steep slopes next to the river Rhône and by its cool continental climate. Though it produces a smaller percentage of Rhone wines than Southern Rhone, the Northern Rhone produces most of the premium appellations like Crozes-Hermitage, Hermitage, Saint Joseph and Condrieu.

The vast majority of wines produced are red and Syrah is the only permitted black grape variety for AOC wines although most may add a small percentage of white wine, often Viognier for its perfume. The small percentage of white wines produced can be made from Marsanne, Roussanne and / or Viognier though the most famous white, Condrieu is Viognier only. Saint Péray is a sparkling white appellation produced from Marsanne and Roussanne.

The general Northern Rhone red wine profile is dark colour, medium body (though Hermitage is fuller-bodied  and Saint Joseph lighter), relatively high tannins though in good wines the tannins will be soft and balanced with the sweetness of the fruit and the acidity. Aromas and flavours include black fruit, black pepper, spice, olives, smoky bacon and sometimes floral aromas. Oak is often used but the effect on the wine will depend on the length of time the wine is in oak, whether it is new or old oak and whether large vats or small barrels are used.

Southern Rhone, known as Rhône meridional, is much bigger, flatter,  warmer with a more Mediterranean climate and has a wider range of wine styles and quality from the more commercial style through to the highest quality like Châteauneuf du Pape. Again most wines produced are red but these wines are usually blends, most often GSM or Grenache, Syrah and Mourvèdre, though many more varieties can be included.

As there are so many permitted varieties it is difficult to describe a typical Southern Rhone wine style other than that Grenache is usually the dominant variety and therefore red fruit, warm spice and herb flavours tend to dominate though black fruit flavours may also be evident especially where Mourvèdre is in the blend. Due to the hotter weather alcohol levels can be very high and if the grapes are left on the vine too long the wine can taste jammy. More vigilant winemakers make sure that the alcohol is kept in balance and that the fruit flavours stay fresh. Oak typically is used less - Grenache doesn't really suit it - but it varies from winemaker to winemaker. Some may choose to mature the Syrah in oak but not the Grenache for example.

There are 28 appellations (or PDOs) in the Rhone including the 7 regionals mentioned above and 2 fortified wine appellations (vins doux naturels) that I will cover at a later date. Looking at the rest… there are 16 crus across Northern and Southern Rhone for still wine (and Saint Péray for sparkling wines only) and two more general appellations which I put into context below and in the diagram: 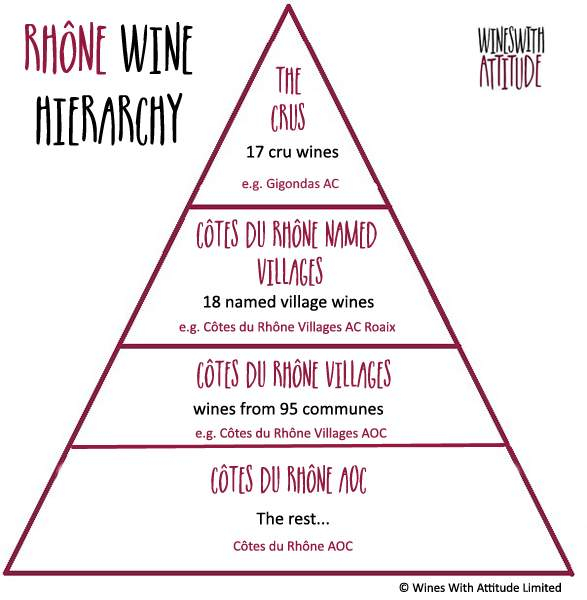 At the top end of the scale are the 17 crus (cru meaning a wine producing area rather than a single vineyard) which conveniently account for about 17% of production of the whole Rhone Valley region; the crus are the smallest regions with their own specific appellations (ACs or AOCs) and therefore their own specific regulations.  Yields differ from cru to cru but the average of just under 35 hectolitres per hectare for all the cru wines is the lowest yield of the whole Rhone region (I shall cover yields in a later blog).

You will often just see the name of the cru on the label; Rhone need not be mentioned at all. The 17 Rhone cru wines include the following and you will see that each cru differs in character from the next though most are generally wines that can age:

Châteauneuf du Pape AOC is by far the biggest cru and was the first appellation in France. 93% of its wine is red, 7% white. 13 grape varieties are traditionally approved but Grenache forms the majority often with Syrah and Mouvèdre; the wine is usually full-bodied with red fruit & spice flavours. The fruit should balance out the high alcohol.

Crozes-Hermitages AOC, being from Northern Rhone, is Syrah for the reds which account for 92% of the wines, with 8% white. The red wines are dark with red fruit and floral aromas developing spice and leather over time.

Gigondas AOC is predominantly (and up to 80%) Grenache and often full-bodied with noticeable tannins and complex yet elegant displaying red and black fruits with white pepper and developing more savoury notes with age.

Rasteau AOC is at least 50% Grenache and mostly from old vines which give added complexity.

Next in the hierarchy of Rhone wines are the Côtes du Rhône Villages wines which in total account for 11% of total Rhone Valley wine production and may be red (96%), white (3%) or rosé (1%). This appellation, which is within the Southern Rhone sub-region incorporates 95 Rhone villages. However the better wines come from 18 named villages which may include their name after Cotes du Rhone Villages AC on the label if and only if all the grapes for the wine come exclusively from that village e.g. Côtes du Rhône Villages AC Roaix. Other named villages that you may have heard of are Plan de Dieu and Sablet. Labels with a vineyard name like Domaine des Escaravailles Les Hautes Granges Cotes du Rhone Roaix indicate that the grapes came from a single vineyard but the vineyards doesn't have any no official status in the hierarchy.

If you see straight Cotes du Rhone Villages AOC on a label the grapes will originate from one of the other 77 villages or from a combination of any of the 95 villages. And if that's not confusing enough, each village will claim its wine has very distinct characteristics but I suspect only true Rhone wine experts would be able to identify each village wine in question. The general descriptors of the village red wines according to the Rhone Wine Association are “generous”  and "full-bodied, meaty and richly aromatic". The red wines must be a minimum of 50% Grenache, 20% Syrah and/or Mourvèdre and a maximum of 20% other permitted grape varieties. They can represent reasonable value sitting between the Rhone crus and the more generic Côtes du Rhône AC.

Côtes du Rhône AC is naturally the largest appellation at 48% of all Rhone region's AC wines. As mentioned above most though not all Côtes du Rhône AC comes from the warmer Southern Rhone and it's split between 87% red, 6% white and 7% rosé. This is the fallback appellation if wines don't meet the regulations for the higher status wines e.g. it is used by négotiants who might buy wine in from right across the Rhone Valley. Average yields are 46hl per hectare.There can be some good Cotes du Rhone wines but there can also be more commercial styles. It makes sense to look at the village wines and the crus to be more certain of getting a high quality wine.

So there it is - the Rhone region in a nutshell. It's not the easiest of regions to understand with so many combinations of grape varieties, terroirs, appellations etc. But once you know where to look you can find some fabulous wines! Check out my Rhone wines here.

Sign up to my newsletter for notification of new wines, blog posts and subscriber-only sales.