There is a lot of talk about vegan wine these days. You may wonder what all the fuss is about. After all wine is made from grapes, a plant, so you would think it fits perfectly into a vegetarian's or vegan's approved list of food stuffs, wouldn't you? This vegan wine guide looks at why wine isn’t always vegan, the differences between vegan and non-vegan wine, the differences between vegan and vegetarian wine and how to make sure you choose vegan wine if you have a preference for it.

Veganism is not just a flash in the pan. The UK's Veganuary campaign - where people eat vegan for the month of January – has risen dramatically year on year since setting up in 2014. In 2020’s campaign more than 400,000 people pledged to try a vegan diet, up from just over 250,000 in 2019. There are now estimated to be over 600,000 people in the UK aged 15 or over who are vegans (according to a report commissioned by the Vegan Society last year) and the rate of growth is increasing. This means that 1.16% of the UK population meet the Society's definition of veganism "... a way of living which seeks to exclude, as far as is possible and practicable, all forms of exploitation of, and cruelty to, animals for food, clothing or any other purpose."  Foodstuffs that are avoided include meat, dairy, eggs and honey. 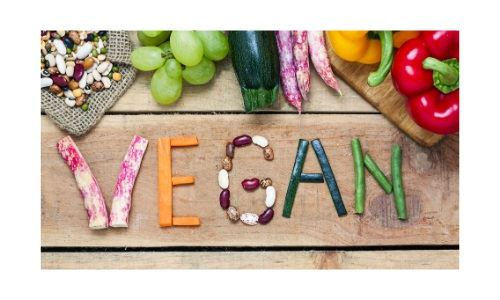 And an increasing number of people who, whilst not following a strict vegan or vegetarian way of life, are buying meat-free and dairy-free products either for health, animal welfare and / or environmental reasons.

The short answer is yes, vegans can drink wine – but not all wine. You may be surprised, even horrified, to know that some wines are not suitable for vegetarians and some not for vegans – and, perhaps worse, there is no requirement to state on the label if a wine is not vegan- or vegetarian-friendly.

Once a wine has been produced, whether a crisp light white wine for drinking in the next year or two or a fuller-bodied red wine that has been aged in oak for a couple of years, the final process before the wine is bottled is known as fining; the aim of fining is to clarify and stabilise the wine before it is released to consumers. And fining may involve the use of animal-based products.

Filtration is sufficient to get rid of some of the larger unwanted particles in wine but without fining wine is likely to be cloudy and potentially have unpleasant aromas and flavour due to microscopic impurities such as dead yeast cells and tiny bits of grape, leaves or stalks. Whilst these usually disperse with time, many winemakers use fining to get rid of the smaller impurities in order to make sure that the consumer gets what they are expecting i.e. a clear, clean-smelling, pleasant-tasting wine.

The fining agents used in the fining process effectively bind with the impurities and the resulting precipitate is removed by filtration or by pumping the wine off the sediment; the problem is that many of the fining agents commonly used consist of animal proteins such as:

Years ago even ox or bull's blood was used but their use was banned in Europe in 1987.

What is vegan wine?

The good news for wine-loving vegans is firstly that wine does not need to be fined - eventually the wine will become clear itself. However most wine drinkers would not accept cloudy wine and most winemakers do not want to have to hang onto their wine in the cellar for a long time.

But secondly there are alternatives to animal proteins that can be used. Bentonite, a form of clay, charcoal, or silica sol are the main acceptable alternatives for vegetarians and vegans. I find bentonite is most commonly used.  Christophe Thibert of Domaine Thibert recently explained to me that the fining process is a very delicate balance; he tries to avoid fining altogether but has to keep checking the wine. If fining is required, Thibert uses bentonite and as little as possible.

Some argue that no traces of animal products remain after fining as all the protein is removed with the impurities. But vegan friends do not agree with that argument - they prefer to drink wine that has had no animal products in it at any stage.

The difference between vegetarian & vegan wine

Vegan-friendly wine would have to be unfined or have had Bentonite, charcoal, or silica sol used as the fining agent. A wine that had been fined with egg whites or casein might be acceptable for vegetarians but not for vegans. However it is probably safer for vegetarians to seek out vegan wines to be absolutely sure that no meat or fish products have been used. 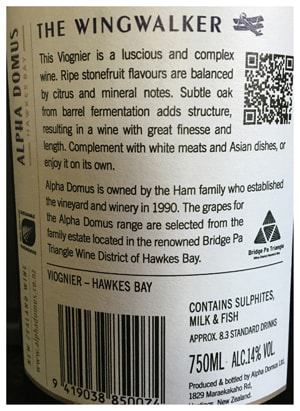 The bad news is that you won't know from most wine labels what has been used to fine a wine if anything.  Only rarely will you find a wine label that states that the wine may contain eggs, fish or milk - despite these being on EU's list of allergens that must be listed on foodstuffs since December 2014. Labels like this one from the lovely Alpha Domus The Wingwalker Viognier are rare.

Most vegetarians would find egg whites and milk/ casein acceptable but vegans would not. It is probably safer for vegetarians to seek out vegan wines to be absolutely sure that no meat or fish products have been used.

One suggestion is to stick to unfiltered wines in order to avoide wines that have been fined with animal-based products. All well and good but I am not convinced that filtering alone would remove all traces of protein and unfiltered wines or wines labelled unfiltered are few and far between. And only occasionally do you see on a wine label that a wine has been produced without fining. Some winemakers believe that fining and filtering can remove too many of the good aromas and flavours. But even if the wine is not fined, for whatever reason the winemaker may choose not to provide that information on the label.

Most 'natural' wines will not have been fined - but some of them can be a little too unfiltered, i.e. the winemaker has chosen to produce a wine that is cloudy and more 'interesting' on the nose and palate which may not be to everyone's taste - read my guide to natural wines for more information. The main problem is that the term natural wine is not defined and can be freely used by some less reputable winemakers.

You may also think that organic and/ or biodynamic wine will be safe for vegans or for vegetarians. I have read several  newspaper articles and blogs that suggest this is the case but they are doing a huge disservice to vegans for whom avoiding animal-based foods is not simply a dietary choice. 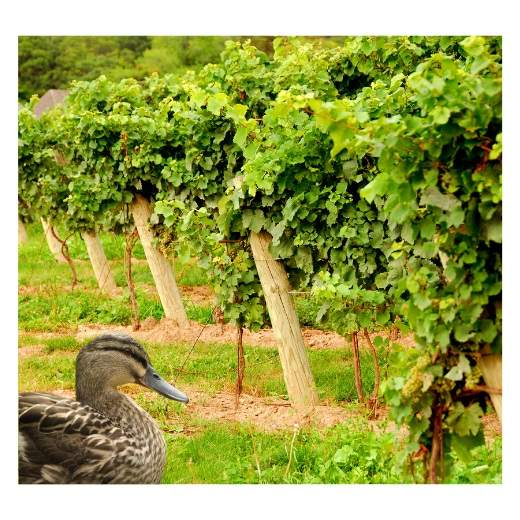 An Austrian winemaker I recently spoke with told me that if you take the definition of veganism to the letter then even animal manure would be banned in the vineyard, something which she as an organic and biodynamic producer relies upon. I have asked my vegan friends but most seem content with the idea of animal manure as fertiliser.

As I think most vegans would accept Johann Reyneke's ethical and sustainable practices for their organic and biodynamic wines - they are herbicide-, pesticide- and fungicide-free. To stop weeds growing they plant 'companion plants' amongst the vines "to fix nitrogen from the atmosphere, help break up compacted soil or even harbour a beneficial insect or two. While all sorts of poisons are usually used to combat pests, we simply release their natural predators, like ducks – there’s nothing more delicious for a duck than a good, juicy snail."  Reyneke wines also taste great!

I cover biodynamic wines in another blog but a common biodynamic practice is burying cowhorn in the vineyard - honestly - and this might also not be considered in line with vegan principles particularly if the cow had suffered in the process of losing its horn. Therefore organic or bio-dynamic wines may also not be suitable for vegans.

And if you're thinking of moving towards beer or cider in order to avoid this issue, beware as beers and ciders may also not be vegan-friendly for similar reasons.

How and where to buy vegan wine

What is the vegan wine solution? What we really need is an internationally recognised definition of vegan wine - and worldwide vegan wine labelling. Some winemakers and wine sellers are  getting wise to this and a few wine labels are beginning to address the situation.

But, until such time as vegan-friendly wine labelling is commonplace, stick to finding a reputable wine merchant - hang on, I know one of those! - who can give you the information you require to make sure that you are making the right choices.

As regular readers and customers know it is Wines With Attitude's ethos to find smaller producers who work sustainably and ethically, with minimal intervention in the vineyard and the wine cellar. Many of the wines I have don't fine or filter their wines at all, or if they do, they don't use animal derived products such as gelatin or isinglass. My Vegan wine category is updated regularly so keep checking back to see what's new.