Should we worry about sulphites in wine?

Every year I pop into RAW, the natural wine fair held in London - and other cities. There is some debate about exactly what a natural wine is and it seems to be the Marmite of the wine world at the moment (you either love it or hate it). Perhaps it may come as a surprise to find that even many so-called 'natural' wines and organic wine have the words "Contains sulphites" (or sulfites) on their labels, words which don't sound very wholesome...

So what are sulphites and why are they in wine? 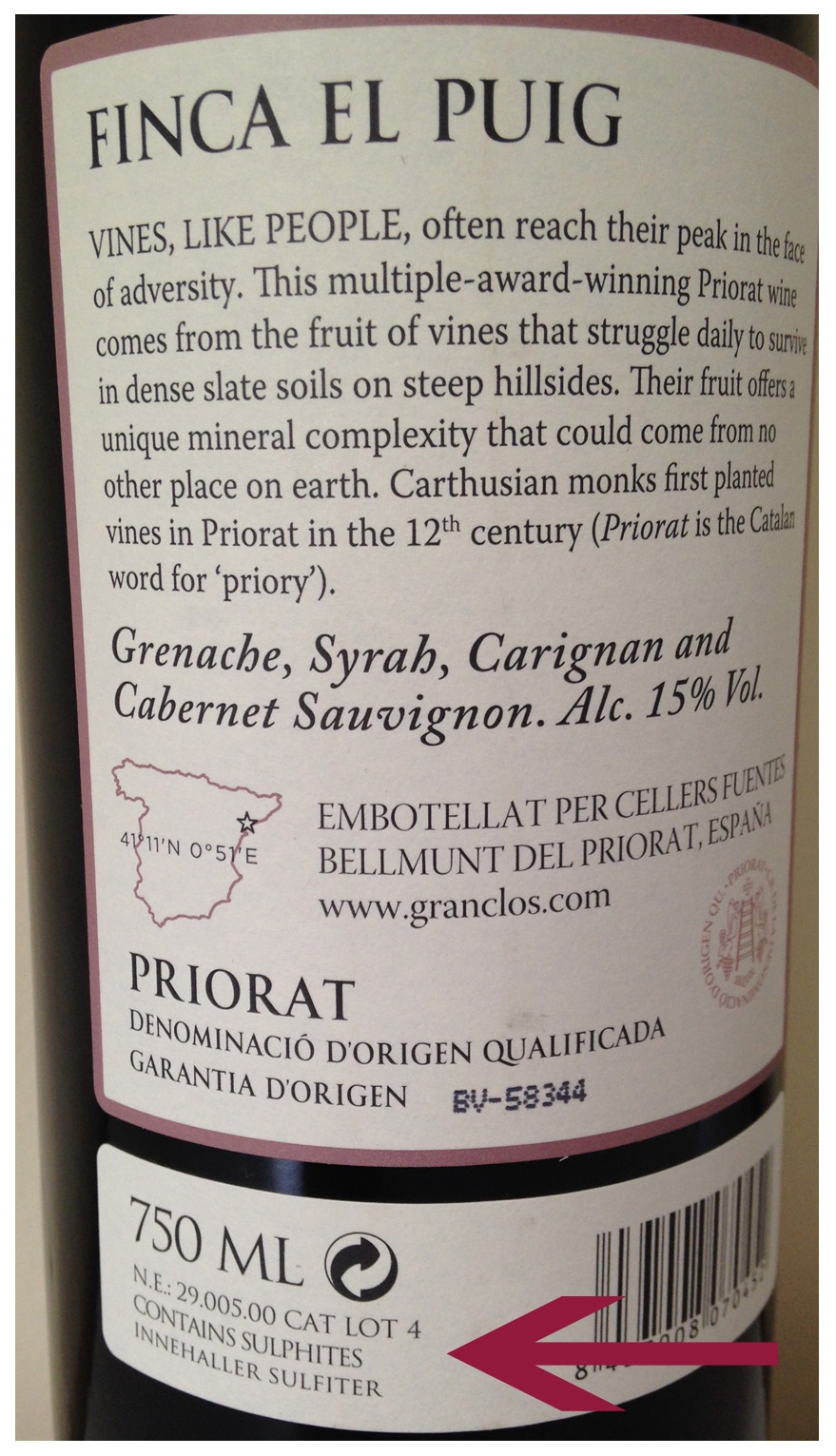 In wine sulphites are effectively sulphur dioxide (E220) which is a natural by-product (in very small amounts) of the fermentation process; but it is also often added to wine at various stages of the wine-making process as a preservative, to stop oxidation and to kill bacteria. Potassium metabisulphite (E224) may be added as an alternative as it releases sulphur dioxide from grapes for the same purposes.

What levels of sulphites are in wine and how safe are they?

It is as a result of the EU food allergens labelling regulations that those words of warning are required on the label of wines if they contain more than 10 parts per million ("PPM") of sulphites, equivalent to 10 mg per litre, so a very small amount. Sulphites and/ or sulphur dioxide are an allergen for a small number of people who can display asthmatic symptoms when in contact with them. Obviously if you are one of the unfortunate few with that sensitivity you should avoid wines containing sulphites or choose those with very low levels - sulphur detection strips are readily available online.

Sulphites in wine have also been thought to be the cause of headaches for some people. However following several studies this theory has largely been disproved. See below my tips for avoiding wine headaches.

The level of sulphites in wine range from about 10 PPM to c.350 PPM. A range of 10 to 40 PPM is considered 'normal' i.e. the wine has only naturally occurring sulphur, so you may see on labels "No added sulphites". But to put things in context, many foodstuffs contain higher levels than most wine e.g. fresh fruit salads, fruit squash, soy sauce and most processed foods. Dried fruits can be especially high in sulphites at up to c.3000 PPM so in comparison 350 PPM does not seem particularly high. By the way, white wines generally have more sulphites than red wine as they are more susceptible to oxidation, not having the high levels of natural antioxidants that red wines have.

The good news is that the permitted levels are much lower than they used to be so winemakers have to control contact with oxygen much more tightly and should therefore use sulphur dioxide sparingly.

Harmless sulphites can sometimes be detected by a struck match aroma which some people think adds character to certain wines.  If you don't like this aroma in your wine the simple solution is to decant the wine and chill it.

As traces of sulphites are produced during fermentation, no wine is truly sulphite-free. It is possible however to make wine without introducing any additional sulphur dioxide but great care has to be taken from the time the grapes are picked through to bottling the wine to avoid oxidation which can kill a wine's fruit flavours. As you can imagine larger, more commercial wine companies are less likely to invest the time and precision needed to control exposure to oxygen so it is generally smaller producers who are looking for a more natural wine reflecting the 'terroir' who produce wine without added sulphites.

The results can be amazing - wines without added sulphur dioxide are considered to have brighter flavours and colour (especially for red wine since sulphur dioxide boosts the extraction of pigments in the wine-making process). But given the risk of oxidation these wines won't keep long and can spoil very easily thus ruining those brighter flavours that the producer has strived to encourage. There is also the danger of the wine developing a very unpleasant 'mousy' character which cannot be cured by decanting or any other means.

So, don't be put off by those words "Contains sulphites" unless you have or suspect you have a sensitivity to them. And if you get chance to try a "No added sulphites" wine, give it a try - but don't keep the bottle open for long!

If you are one of those people who suffers from headaches whenever they drink wine even in small amounts, I firstly recommend avoiding cheap wine - you may think this is just an effort to tempt you to buy wines with attitude but in general cheaper wines are less well made and more likely to have been adjusted with additional sugar, alcohol, oak flavourings etc. It may also be worth trying to avoid oaked wines and grapes particularly high in tannins like Cabernet Sauvignon, Touriga Nacional and Nebbiolo as my theory (not scientifically proven) is that the tannins which develop in wine aged in oak can be the cause of headaches for some people.