Shiraz or Syrah, Chardonnay and Cabernet Sauvignon remain by far the most planted wine grape varieties in Australia, in fact 60% of total grapes crushed there in 2016 *. But for quite some time now several Italian varieties have been creeping into Australian vineyards: so why and why now?

Australia's vineyards are dominated by French varieties - at least 90% of crush in 2016*. The basis for this is historical. James Busby, a Scotsman by birth and considered the father of Australia's vines, shipped cuttings from French and to a lesser extent Spanish varieties to Australia around 1832 since they were recognised as the varieties producing some of the finest wines at that time. So diversity has been long overdue.

There is also a demand for diversity. Tastes in wine have been changing in Australia and in its major wine export markets like the UK. As I have written previously Australian wine, certainly at the lower end of the market, had long been synonymous with very concentrated, slightly sweet, fruity wines that were high in alcohol but largely lacking in structure. Since it is largely tannins (in red wine) and acidity that give wine backbone, this is not surprising as many French varieties are low in these two elements, certainly compared with most Italian varieties. Australian wines were just too "samey".

There has been with a shift towards more savoury flavoured wines, partly in rebellion to the fruit bombs of the past and in my opinion partly due to food culture which has seen a rise in attention to good food and a plethora of cookery shows. Wines that are more on the savoury side with more acidity and structure, like those produced from Italian grape varieties, are generally more food-friendly. The large number of Italian immigrants in Australia have made Italian food very popular there so it is actually surprising that more Italian wines have not been produced before now.

Italy is renowned for its huge range of indigenous grape varieties which is providing some of the diversity sought; grapes now being grown in Australia include Arneis, Montepulciano, Nebbiolo, Barbera, Fiano, Sangiovese, Dolcetto, Nero d'Avola and more recently Glera. This latter is the Prosecco grape and, as an aside, we are about to start seeing Australia, a little belatedly, try to muscle in on the UK's love of Prosecco. I recently tasted one of their first Proseccos (though it can't be called that in the EU) and I don't think that one in particular will be an immediate threat in what is already a slightly dwindling market.

The search for acidity in wines from Australia also arose as a result of climate change. Australia has been known in the past for its sometimes excessive use of acidification of its wines - as the grapes have been left to ripen in the sunshine as long as possible to achieve the juicy fruit flavours and high alcohol levels once desired, their natural acidity falls away. Given global warming the hotter vine-growing areas of Australia were going to struggle to achieve the required natural acidity in their wines and so needed to find grapes that could cope more easily with excessive heat and that are lower in alcohol.

As mentioned above, Italian grape varieties generally have more natural acidity and so can cope better with hotter climatic conditions. 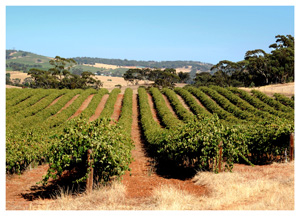 In fact Australia has a wide range of climates and 'terroirs' and there is increasingly research into which areas suit which grapes. Previously little attention had been paid to elevation, soils etc, components of 'terroir' that help a wine to develop more character. Their wine regulations are not as strict as those of France, for example; so there is no restriction on which varieties may be planted or indeed where they may be planted. And another factor which aids diversification is that Australia's wine industry has a history of experimentation; they are not afraid to dig up swathes of vineyards to respond to changes in taste or in climate.

Australia will never produce wines that are identical to Italian varietal wines because there are other factors which affect the taste - though the more commercial wine-makers will try. The better winemakers with their improving techniques in the vineyard and in the winery aim to produce their own interpretation; they try to create a new style of wine whilst maintaining the characteristics of the grape. And largely with success.

Caution is needed. Pinot Grigio was at the forefront of the diversification in Australia but it has now become so widely planted that most of the wine produced from it is considered to be more of the commercial style rather than a premium wine.

Whilst these Italian varieties are still only a small percentage of total wine grapes crushed in Australia, further experimentation means that we will see this percentage increase - and with the general improvements in wine-making in the country hopefully we will see increasing numbers of better quality wines too.