Ever wondered about the difference between ruby and tawny port? Ruby port seems to be more popular but tawny port is having a bit of a revival either slightly chilled or with tonic as an aperitif or as a more traditional after-dinner drink. Having written in detail about ruby ports in another blogpost, I’m now writing about tawny port and how it is produced, how tawny port differs from ruby port, the different styles of tawny port that you can get (and one you may want to avoid), what tawny port tastes like and which foods it goes with – and it’s not just cheese!

How port is produced

All port is produced in a similar way to still wine up to the fermentation stage; quite early during that fermentation process, grape-based alcohol is added to interrupt the fermentation, effectively killing off the yeast in the grape juice so that it can no longer interact with the sugar to produce alcohol. This means that some unfermented sugar is retained in the wine making it a naturally sweet wine and raising the ABV from 5 - 9% to about 19% - 22%; the increased level of alcohol also stabilises the port whilst it is ageing.

The level of sweetness depends on how soon the fermentation is halted. Other fortified wines produced by this port method include most Madeiras and Vins Doux Naturels. Sherry is made in a similar way but the grape spirit is added after fermentation.

The English can take some credit for creating port as English merchants added brandy to still red wine to preserve it for transportation. Port is produced in the Douro region, a denominated wine region since 1756 and then moved for ageing to the coastal town of Villa Nova de Gaia. The wine used to be transported on the river Douro by the beautiful rabelos but these days are moved by road.

Many grape varieties are approved to be used to make port and they are usually all grown and fermented together in complex blends. Touriga Nacional is perhaps the best of the port grapes and the best known. It is also used for the ever-improving Portuguese still red wines like Churchill Estate's Douro Touriga Nacional 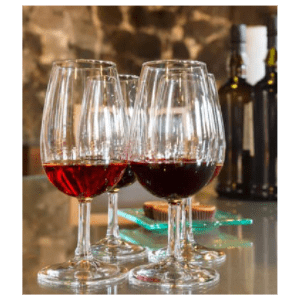 Most tawny ports are wood ports which means that they are matured in barrel or cask for several years and therefore have some exposure to oxygen (more than they would if aged in bottle) and this exposure contributes to the ports losing their red hues and gaining a complex array of flavours and a silky texture. They are generally therefore

Tawny ports are bottled after ageing in barrel, when ready to drink, and do not age further in bottle so they should be drunk within a couple of years of bottling.

As the ageing of tawny port has been in barrel there should be no sediment in the bottle so decanting should not be required.

Note however that tawny port oxidises fairly rapidly after opening so do not keep it for longer than 1 or 2 weeks, possibly longer if you use a simple wine preservation system like a Vacuvin to pump out excess air from the bottle. Very old and Colheita port should keep longer - see below for the various serving suggestions to help you make the most of tawny port before it spoils.

In contrast most ruby ports are bottle-aged (after an initial ageing in cask) and therefore have little exposure to oxygen so that ageing is very slow leading to a smooth, redder, more fruity style of port. They are also rarely filtered before bottling so generally require decanting. Read more about decanting in my blog "To decant or not to decant".

Different styles of tawny port & what they taste like

However, beware, some ports labelled as tawny ports are no older than ruby port and are not really representative of the general tawny port style. These are produced from lighter coloured wines from grapes grown in the cooler part of the Douro valley that may not have had chance to ripen fully. Consequently these unaged tawny ports are not deep coloured, nor are their flavours very intense. There are however ways of intensifying the colour even simply by leaving them in the hotter part of the valley for longer than normal to "bake" but this leaves the port with a baked, flat taste without many fruit flavours and a lack of freshness.

This lighter style may be your preference but if you like the amber-coloured, nutty-flavoured style, you might be disappointed if you were to buy one of these. 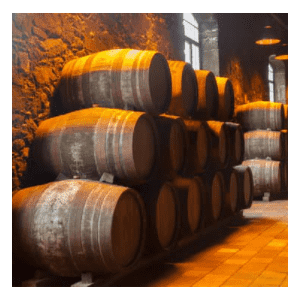 Given my lack of enthusiasm for straight tawny port you will not be surprised to read that my advice would be to ignore anything labelled simply "tawny port" and select an aged tawny port which means that it has been aged in wooden barrels or cask for at least six years. Ageing tawny ports are kept in Villa Nova de Gaia where it is cooler to prevent them from spoiling in the heat.

Reserve or Reserva on the label of a tawny port means that it has been aged in wood for a minimum of six years; it still retains some fruity characteristics but shows some signs of wood ageing.

These tawny ports are older than reserve tawny port but note that the age is only an indication as the ports are made up of a blend of wines and therefore the age indication is an average of all the wines in the blend.

Port houses will mix a blend according to their "house style" and it will remain fairly consistent year on year. As you might expect given the length of time spent in oak and exposed (albeit very gradually) to air, these aged tawny ports become deeper in colour, more luscious in texture and more intense in their flavours the older they become. 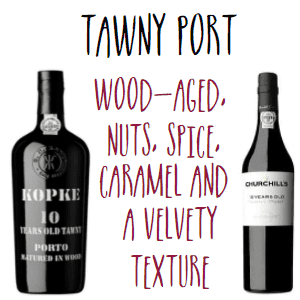 The flavour characteristics of all age-indicated ports will be concentrated and complex but the 10 year old tawny ports should display more fresh fruit flavours than dried fruit flavour with more subtle nuttiness and spice (unlike a ruby port which will be mainly fresh berry flavours) and a silky texture and the 40 year old tawny port should taste of dried fruits like raisins, nuts vanilla, caramel, honey and spice. The 30 and 40+ year old tawnies are usually extremely rich with a very silky texture but can sometimes take on hints of vinegar.

Colheita tawny ports are produced from the grapes of one single vintage and are aged in cask for a minimum seven years though usually for closer to 20 years (or more). They can vary in style and flavours depending on the length of ageing but are required to display the characteristics of the particular vintage. 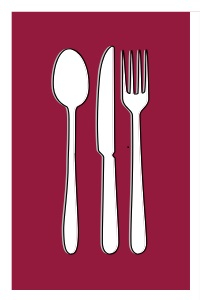 Like ruby port, Tawny port is traditionally drunk and goes well with hard cheeses like Cheddar cheese and with blue cheese (also sheeps' cheeses like Manchego). But it is so much more versatile than ruby port. Tawny port can be a great match for:

- and for those with less of a sweet tooth, foie gras, especially if served with something sweet to cut through the richness.

Serve tawny port generally at 10 - 12 °C but cooler still when served as an aperitif.

You can see from the above serving suggestions why it's a great wine to have around at Christmas. But, don't forget not to keep tawny port for too long after opening the bottle.