A guide to Ruby Ports

Port is such a huge subject so I'm splitting my blogposts into ruby ports and tawny ports. This is part 1, all about ruby ports, the different types and how they are made.

How port is produced

All port is produced in a similar way to still wine up to the fermentation stage; during that process grape-based alcohol is added to interrupt fermentation, effectively killing off the yeast in the grape juice so that it can no longer interact with the sugar to produce alcohol. This means that some unfermented sugar is retained in the wine making it a naturally sweet wine with an ABV of about 19% - 22%; the increased alcohol also stabilises the port whilst it is ageing. The level of sweetness depends on how soon the fermentation is halted. Other fortified wines produced by this port method include most Madeiras and Vins Doux Naturels.

Sherry is made in a similar way but the grape spirit is added after fermentation.

The English can take some credit for creating port as English merchants added brandy to still red wine to preserve it for transportation. Port is produced in the Douro region, a denominated wine region since 1756 and then moved for ageing to the coastal town of Villa Nova de Gaia. The wine used to be transported on the river Douro by the beautiful rabelo boats but these days are moved by road.

Many grape varieties are approved to be used to make port and they are usually all grown and fermented together. Touriga Nacional is perhaps the best and the best known. It is also used for the ever-improving Portuguese still red wines like Churchill Estate's Douro Touriga Nacional.

Like all wine port can vary in terms of style, sweetness etc. I summarise them below and in a future blog.

The first distinction to make is between the ageing processes of port:

Most ruby ports are bottle-aged and not filtered before bottling so generally require decanting. Read more about decanting in my blog "To decant or not to decant" but for more specific guidance see each type of port below.

What to eat with ruby port

Once you have opened a bottle of ruby port, don't be tempted to keep it until next Christmas; it will deteriorate on contact with the air so should be consumed within a few days of opening.

In this blog I cover the different types of Ruby Ports. You can also read all about tawny port in Part 2 of my Port blog series. 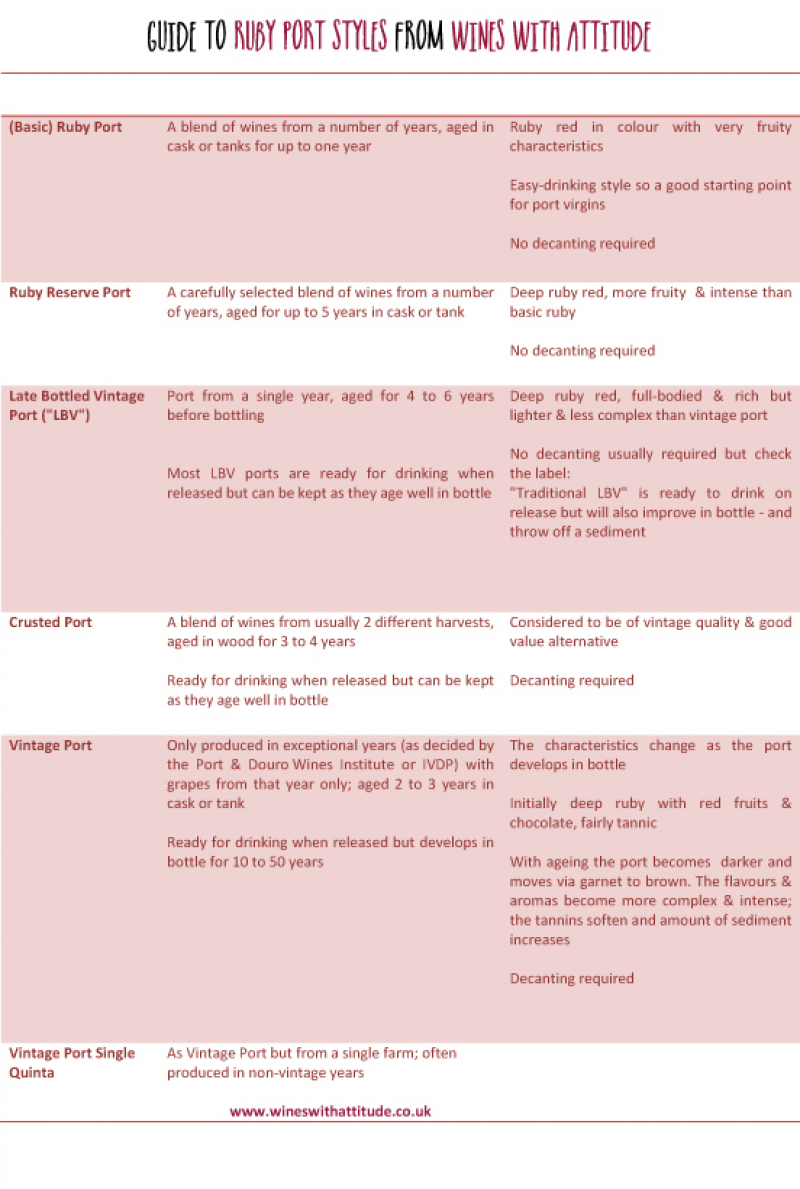